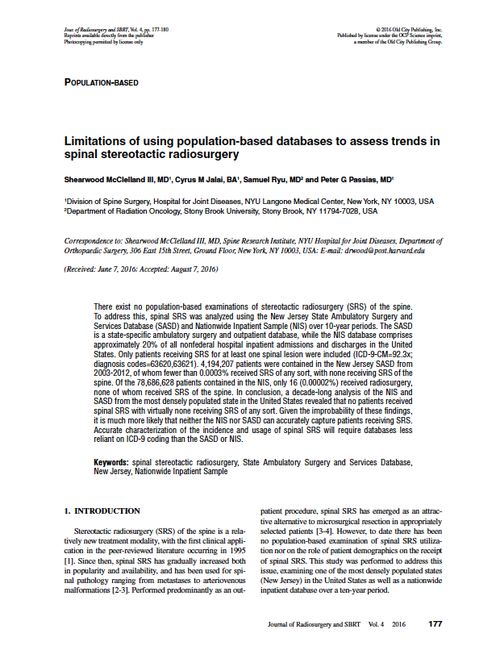 There exist no population-based examinations of stereotactic radiosurgery (SRS) of the spine. To address this, spinal SRS was analyzed using the New Jersey State Ambulatory Surgery and Services Database (SASD) and Nationwide Inpatient Sample (NIS) over 10-year periods. The SASD is a state-specific ambulatory surgery and outpatient database, while the NIS database comprises approximately 20% of all nonfederal hospital inpatient admissions and discharges in the United States. Only patients receiving SRS for at least one spinal lesion were included (ICD-9-CM=92.3x; diagnosis codes=63620,63621). 4,194,207 patients were contained in the New Jersey SASD from 2003-2012, of whom fewer than 0.0003% received SRS of any sort, with none receiving SRS of the spine. Of the 78,686,628 patients contained in the NIS, only 16 (0.00002%) received radiosurgery, none of whom received SRS of the spine. In conclusion, a decade-long analysis of the NIS and SASD from the most densely populated state in the United States revealed that no patients received spinal SRS with virtually none receiving SRS of any sort. Given the improbability of these findings, it is much more likely that neither the NIS nor SASD can accurately capture patients receiving SRS. Accurate characterization of the incidence and usage of spinal SRS will require databases less reliant on ICD-9 coding than the SASD or NIS.