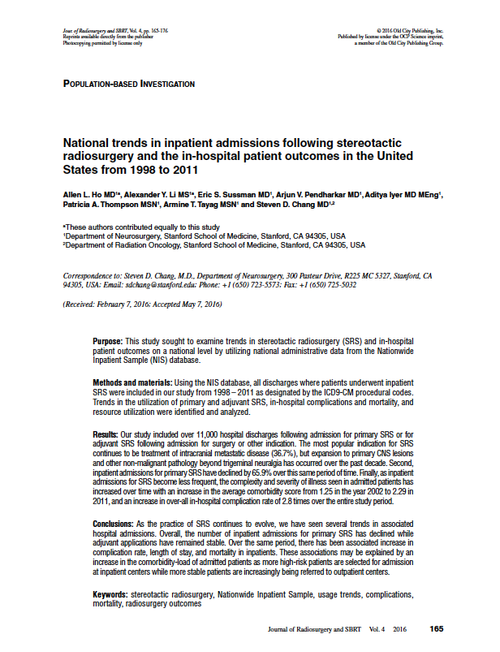 Methods and materials: Using the NIS database, all discharges where patients underwent inpatient SRS were included in our study from 1998 – 2011 as designated by the ICD9-CM procedural codes. Trends in the utilization of primary and adjuvant SRS, in-hospital complications and mortality, and resource utilization were identified and analyzed.

Results: Our study included over 11,000 hospital discharges following admission for primary SRS or for adjuvant SRS following admission for surgery or other indication. The most popular indication for SRS continues to be treatment of intracranial metastatic disease (36.7%), but expansion to primary CNS lesions and other non-malignant pathology beyond trigeminal neuralgia has occurred over the past decade. Second, inpatient admissions for primary SRS have declined by 65.9% over this same period of time. Finally, as inpatient admissions for SRS become less frequent, the complexity and severity of illness seen in admitted patients has increased over time with an increase in the average comorbidity score from 1.25 in the year 2002 to 2.29 in 2011, and an increase in over-all in-hospital complication rate of 2.8 times over the entire study period.

Conclusions: As the practice of SRS continues to evolve, we have seen several trends in associated hospital admissions. Overall, the number of inpatient admissions for primary SRS has declined while adjuvant applications have remained stable. Over the same period, there has been associated increase in complication rate, length of stay, and mortality in inpatients. These associations may be explained by an increase in the comorbidity-load of admitted patients as more high-risk patients are selected for admission at inpatient centers while more stable patients are increasingly being referred to outpatient centers.