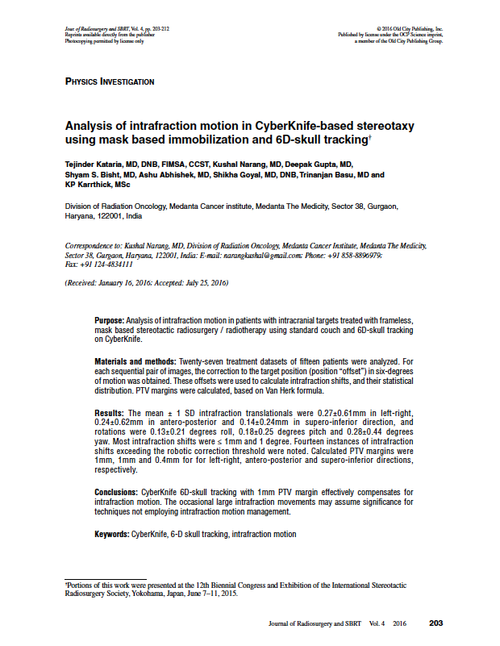 Materials and Methods: Twenty-seven treatment datasets of fifteen patients were analyzed. For each sequential pair of images, the correction to the target position (position “offset”) in six-degrees of motion was obtained. These offsets were used to calculate intrafraction shifts, and their statistical distribution. PTV margins were calculated, based on Van Herk formula.

Results: The mean ± 1 SD intrafraction translationals were 0.27±0.61mm in left-right, 0.24±0.62mm in antero-posterior and 0.14±0.24mm in supero-inferior direction, and rotations were 0.13±0.21 degrees roll, 0.18±0.25 degrees pitch and 0.28±0.44 degrees yaw. Most intrafraction shifts were ≤ 1mm and 1 degree. Fourteen instances of intrafraction shifts exceeding the robotic correction threshold were noted. Calculated PTV margins were 1mm, 1mm and 0.4mm for for left-right, antero-posterior and supero-inferior directions, respectively.