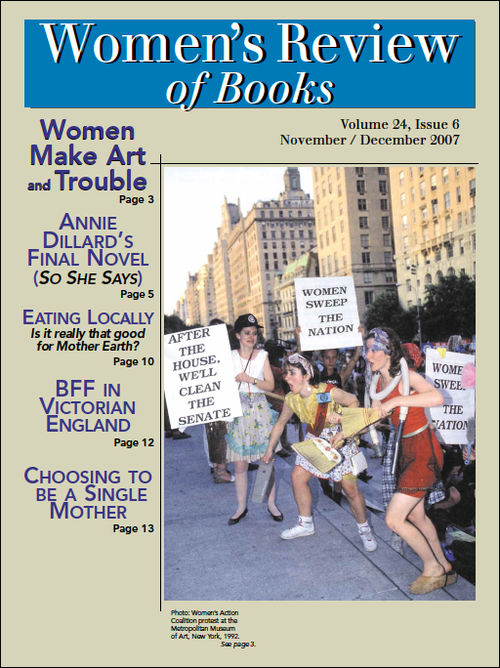 p. 6
Veiled Bestsellers Soft Weapons: Autobiography in Transit By Gillian Whitlock
Let Me Tell You Where I Have Been: New Writing By Women of the Iranian Diaspora Edited by Persis Karim
Reviewed by Jasmin Darznik

p. 8
Not Saying, But Doing Chance and Circumstance: Twenty Years with Cage and Cunningham By Carolyn Brown
Reviewed by Debra Cash

p. 10
The Politics of the Table Animal, Vegetable, Miracle: A Year of Food Life By Barbara Kingsolver with Steven L. Hopp and Camille Kingsolver
Reviewed by Jan Zita Grover

p. 12
Love and Marriage Between Women: Friendship, Desire, and Marriage in Victorian England By Sharon Marcus
Reviewed by Rebecca Steinitz

p. 13
Reluctant Revolutionaries Single by Chance, Mothers by Choice: How Women are Choosing Parenthood without Marriage and Creating the New American Family By Rosanna Hertz
Naked on the Page: The Misadventures of My Unmarried Midlife By Jane Ganahl
Single Mom Seeking: Playdates, Blind Dates, and Other Dispatches from the Dating World By Rachel Sarah
Reviewed by E. Kay Trimberger

p. 17
Poetry “That Ring, That Veil” and “The Burning of the Books” By Irene Willis

p. 20
Monstrous Beings In Need of a Hairwash The Blue of Her Body By Sarah Greenslit
Incubation: A Space for Monsters By Bhanu Kapil
The Revisionist By Miranda Melis
Reviewed by Mary Cappello

p. 22
Found In Translation Four From Japan: Contemporary Poetry and Essays by WomenIntroduction and Translations by Sawako Nakayasu
Inside and Other Short Fiction: Japanese Women by Japanese Women Compiled by Cathy Layne
Reviewed by Daniela Hurezanu

p. 23
Art and Resistance Michelangelo in Ravensbruck: One Woman’s War Against the Nazis By Countess Karolina Lanckororiska
Reviewed By Rochelle G. Saidel

p. 25
No Media, No Progress Women and Media: A Critical Introduction By Carolyn M. Byerly and Karen Ross
Reviewed By Ariel Dougherty

p. 27
The Truths Within Secrets of Women: Gender, Generations, and the Origin of Human Dissection By Katharine Park
Reviewed By Tara Nummedal

p. 30
Interview Feeling Like a 2,000-Year-Old Lesbian: WRB editor Amy Hoffman talks about the alternative press, Women’s Review of Books, and her new memoir, An Army of Ex-Lovers: My Life at the Gay Community News (2007).