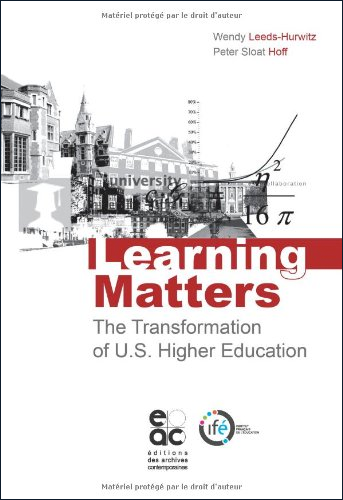 Higher education in the United States of America, considered by many to set a worldwide standard for broad access and high levels of excellence, has for many decades seen massive changes in its approaches to teaching and learning. Redesigning and transforming the way colleges and universities teach their students has been likened to reconstructing an airplane while it remains aloft. More than 4,000 US colleges and universities have met the challenge by analyzing major changes in student populations and introducing new instructional techniques that recognize the primacy of learning over teaching. This seemingly innocent but powerful transformation, acknowledging that teaching only matters as a means to the real end – learning – is powering a pedagogical revolution.

The Learning Revolution in US higher education began when World War II veterans flooded university classrooms, soon to be followed by their children, the American “Baby Boom.”  Overwhelming numbers of new students from new kinds of backgrounds flooded colleges and universities, forcing professors to rethink how they went about teaching these new generations. To handle the numbers, many new universities were created, and many established centers for teaching excellence to help professors adapt to new populations with new techniques. In the 1990s, higher education further professionalized the teaching craft via the Scholarship of Teaching and Learning. Research into how students learn and how to help them learn took its place alongside traditional academic research. Aided by a wave of new technologies, teaching centers and the scholarship of teaching and learning are transforming the university classroom as well as many new venues outside the classroom where learning now takes place.  The resulting new pedagogical architecture now embraces every dimension of US higher education.

Peter Sloat Hoff, President Emeritus of the University of Maine, has focused on excellence in teaching and learning throughout his forty-year academic career. As a professor in Wisconsin, Hoff won a university teaching award, and directed the University of Wisconsin-Parkside Center for Teaching Excellence, the statewide Undergraduate Teaching Improvement Council, and the Wisconsin Lilly Fellows Project. As academic vice chancellor at Indiana University Southeast, the University System of Georgia, and the California State University, he established teaching excellence centers and state initiatives to transform teaching and learning. As president of Maine’s Land Grant research university, Hoff took special pride in its growth and achievements as a leading center for learning—from its unique Honors College to its multidisciplinary doctoral programs. Hoff also served as a member of the Kellogg Commission on the Future of State and Land Grant Universities, whose reports echo many of the findings and recommendations in Learning Matters.

Wendy Leeds-Hurwitz is Professor Emerita of Communication at the University of Wisconsin-Parkside, where she taught for 28 years, helping advance a wide variety of pedagogical topics, from freshman seminars to capstone courses, and from the integration of technology to the design of civic engagement projects. She has received campus awards for teaching and research, a national award for service, and has published ten previous books, including Communication in Everyday Life and Socially Constructing Communication. Leeds-Hurwitz is currently Director of the Center for Intercultural Dialogue, based in Washington, D.C. In that role she is helping US scholars connect with international peers.