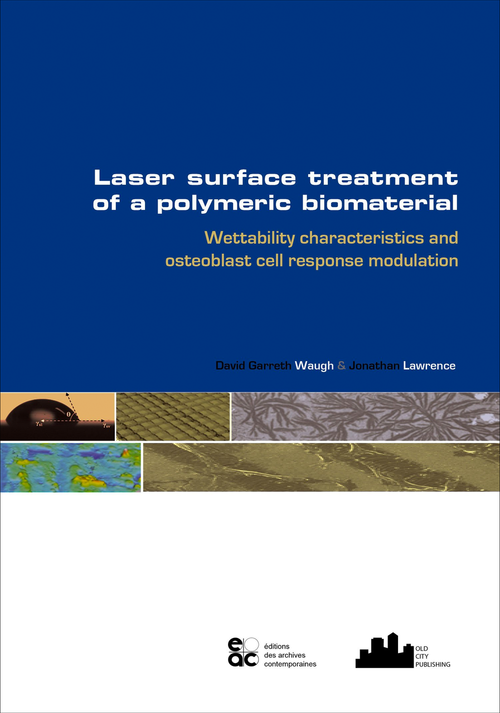 Biotechnology has the potential to improve people's quality of life and holds the key to-many unmet clinical needs. In the UK alone the biotechnology market is worth £4.5 billion and estimates of future growth ranks from 10 to 15%. This growth can only be driven by the increased use of inexpensive and easy to manufacture polymeric biomaterials.

Although polymer science is a rapidly developing area of research, it remains that one of the most intractable problems encountered in biotechnology is that the performance of polymeric biomaterials depends both upon the bulk and surface properties.

In this book the authors describe Their work using lasers to modify the wettability characteristics of nylon 6,6 (as wetting often is the primary factor dictating the adhesion and bonding potential of materials) as a route to enhancing the area in terms of in vitro osteoblast cell response. What is more, modifying wettability characteristics in this way is shown to be a highly attractive means of estimating the biofunctionality of a polymer. The book demonstrates and explains how the generation of a biomimetic polymers and is surface using laser beams provides an in vitro platform on which to deposit and grow cells for either the development of implants or to reconstitute functional tissue. The correlative trends and generic characteristics which are identified are in the book between the laser treatment, wettability characteristics and osteoblast cell response of the nylon 6,6 provide a means to estimate the osteoblast cell response in vivo. The book shows clearly that laser surface modification of polymeric materials has tremendous potential for application within the field of regenerative medicine.

Dr. David Waugh is a founding member of the Laser and Photonics Engineering Group and Senior Lecturer in the School of Engineering at the University of Lincoln, UK. He completed His PhD research on the surface of laser treatment of polymeric biomaterials to modulate wettability characteristics and subsequent osteoblast cell response in 2010 at Loughborough University. Prior to this he therefor obtained His MPhys and MSc in Physics with lasers and photonics at the University of Hull, UK in 2006 and 2007, respectively.

Professor Jonathan Lawrence is Director of the Laser and Photonics Engineering Group in the University of Lincoln and Editor-in-Chief of Lasers in Engineering. His main contribution has been in using lasers for wettability characteristics modification, improving the biocompatibility of materials using laser treatment and developing a technology for laser ignition in gas turbines. He has presented and published widely in these areas, including five patents, seven books and over 120 journal papers.