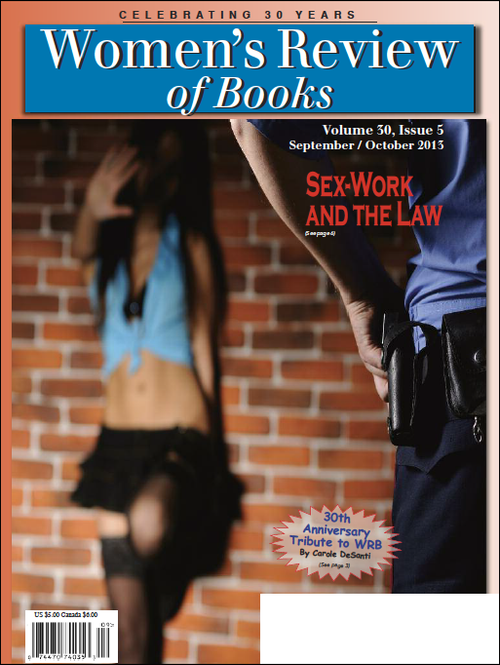 p. 3
Not Just the Wife of Her Husband Eslanda: The Large and Unconventional Life of Mrs.Paul Robeson By Barbara Ransby
Reviewed by Mary Helen Washington

p. 3
WRB Celebrating 30 Years As Long as it Takes By Carole DeSanti

p. 8
Disability, in History and in Life A Disability History of the United States By Kim E. Nielsen
Don’t Call Me Inspirational: A Disabled Feminist Talks Back By Harilyn Rousso
Reviewed by Susan McGee Bailey

p. 18
Leaping Into Mystery  The Dancing Goddesses: Folklore, Archeology, and the Origins of European Dance By Elizabeth Wayland Barber
Reviewed by Debra Cash

p. 20
Reproductive Rights As They Are Now Crow After Roe: How “Separate But Equal” Has Become the New Standard in Women’s Health and How We Can Change That By Robin Marty and Jessica Mason Pieklo
Generation Roe: Inside the Future of the Pro-Choice Movement By Sarah Erdreich
Reproductive Politics: What Everyone Needs to Know By Rickie Solinger
Reviewed by Janet Golden

p. 22
Women Working Hard  Journeywoman: Swinging a Hammer in a Man’s World By Kate Braid
Dirt Work: An Education in the Woods By Christine Byl
On Equal Terms: Women in the Trades, 35 Years & Still Organizing Created By Susan Eisenberg
Reviewed by Brigid O’Farrell

p. 24
The Possibility Of Happy Endings My Beloved World By Sonia Sotomayor
Reviewed by Ruth Rosen

p. 26
Beyond Saving One Woman At A Time  The Political Economy of Violence Against Women By Jacqui True
Reviewed by Jody Raphael

p. 30
Stereotype-Threat In The Sciences Breaking into the Lab: Engineering Progress for Women in Science By Sue V. Rosser
I Died for Beauty: Dorothy Wrinch and the Cultures of Science By Marjorie Senechal
Reviewed by Veronica I. Arreola