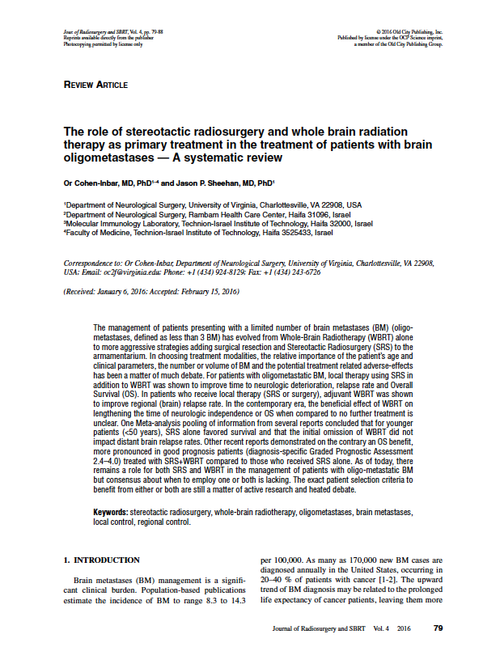 The role of stereotactic radiosurgery and whole brain radiation therapy as primary treatment in the treatment of patients with brain oligometastases — A systematic review
Or Cohen-Inbar and Jason P. Sheehan

The management of patients presenting with a limited number of brain metastases (BM) (oligometastases, defined as less than 3 BM) has evolved from Whole-Brain Radiotherapy (WBRT) alone to more aggressive strategies adding surgical resection and Stereotactic Radiosurgery (SRS) to the armamentarium. In choosing treatment modalities, the relative importance of the patient’s age and clinical parameters, the number or volume of BM and the potential treatment related adverse-effects has been a matter of much debate. For patients with oligometastatic BM, local therapy using SRS in addition to WBRT was shown to improve time to neurologic deterioration, relapse rate and Overall Survival (OS). In patients who receive local therapy (SRS or surgery), adjuvant WBRT was shown to improve regional (brain) relapse rate. In the contemporary era, the beneficial effect of WBRT on lengthening the time of neurologic independence or OS when compared to no further treatment is unclear. One Meta-analysis pooling of information from several reports concluded that for younger patients (<50 years), SRS alone favored survival and that the initial omission of WBRT did not impact distant brain relapse rates. Other recent reports demonstrated on the contrary an OS benefit, more pronounced in good prognosis patients (diagnosis-specific Graded Prognostic Assessment 2.4–4.0) treated with SRS+WBRT compared to those who received SRS alone. As of today, there remains a role for both SRS and WBRT in the management of patients with oligo-metastatic BM but consensus about when to employ one or both is lacking. The exact patient selection criteria to benefit from either or both are still a matter of active research and heated debate.