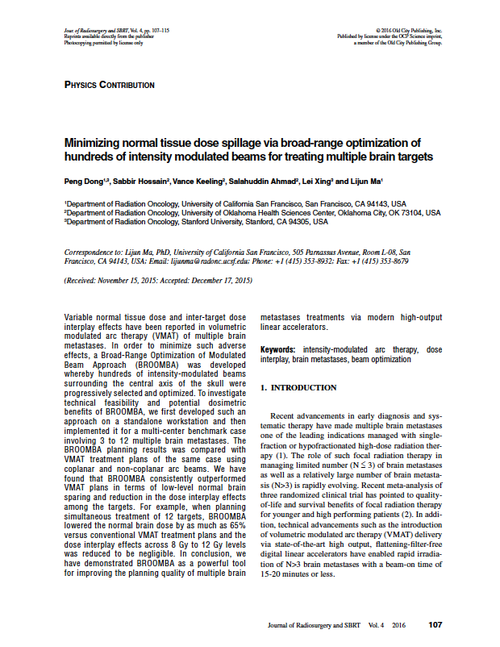 Variable normal tissue dose and inter-target dose interplay effects have been reported in volumetric modulated arc therapy (VMAT) of multiple brain metastases. In order to minimize such adverse effects, a Broad-Range Optimization of Modulated Beam Approach (BROOMBA) was developed whereby hundreds of intensity-modulated beams surrounding the central axis of the skull were progressively selected and optimized. To investigate technical feasibility and potential dosimetric benefits of BROOMBA, we first developed such an approach on a standalone workstation and then implemented it for a multi-center benchmark case involving 3 to 12 multiple brain metastases. The BROOMBA planning results was compared with VMAT treatment plans of the same case using coplanar and non-coplanar arc beams. We have found that BROOMBA consistently outperformed VMAT plans in terms of low-level normal brain sparing and reduction in the dose interplay effects among the targets. For example, when planning simultaneous treatment of 12 targets, BROOMBA lowered the normal brain dose by as much as 65% versus conventional VMAT treatment plans and the dose interplay effects across 8 Gy to 12 Gy levels was reduced to be negligible. In conclusion, we have demonstrated BROOMBA as a powerful tool for improving the planning quality of multiple brain metastases treatments via modern high-output linear accelerators.