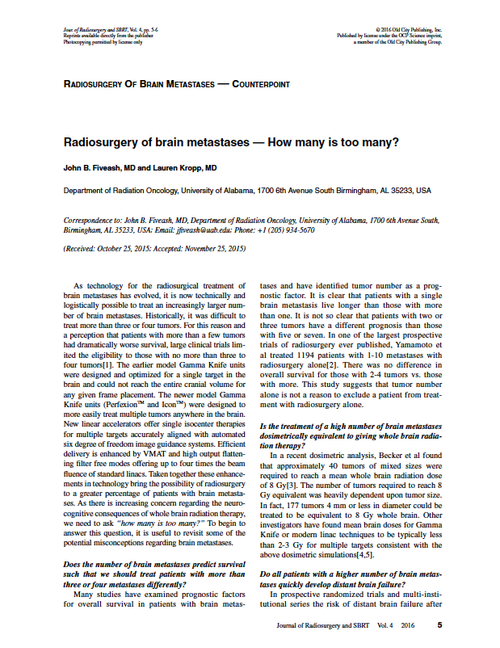 Radiosurgery of brain metastases — How many is too many?
John B. Fiveash and Lauren Kropp

As technology for the radiosurgical treatment of brain metastases has evolved, it is now technically and logistically possible to treat an increasingly larger number of brain metastases. Historically, it was difficult to treat more than three or four tumors. For this reason and a perception that patients with more than a few tumors had dramatically worse survival, large clinical trials limited the eligibility to those with no more than three to four tumors[1]. The earlier model Gamma Knife units were designed and optimized for a single target in the brain and could not reach the entire cranial volume for any given frame placement. The newer model Gamma Knife units (PerfexionTM and IconTM) were designed to more easily treat multiple tumors anywhere in the brain. New linear accelerators offer single isocenter therapies for multiple targets accurately aligned with automated six degree of freedom image guidance systems. Efficient delivery is enhanced by VMAT and high output flattening filter free modes offering up to four times the beam fluence of standard linacs. Taken together these enhancements in technology bring the possibility of radiosurgery to a greater percentage of patients with brain metastases. As there is increasing concern regarding the neurocognitive consequences of whole brain radiation therapy, we need to ask “how many is too many?” To begin to answer this question, it is useful to revisit some of the potential misconceptions regarding brain metastases.