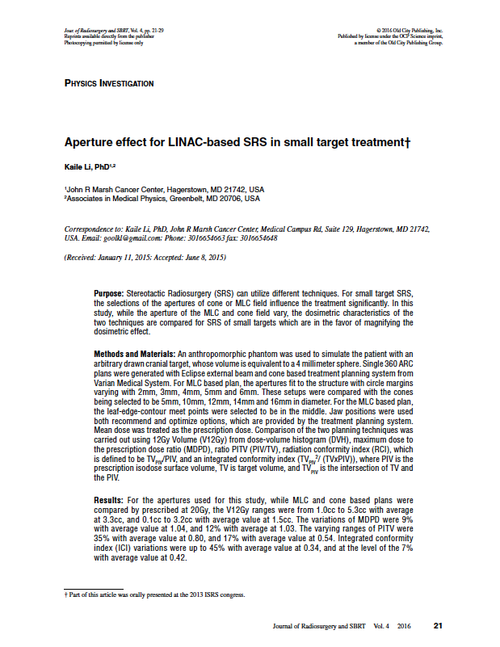 Purpose: Stereotactic Radiosurgery (SRS) can utilize different techniques. For small target SRS, the selections of the apertures of cone or MLC field influence the treatment significantly. In this study, while the aperture of the MLC and cone field vary, the dosimetric characteristics of the two techniques are compared for SRS of small targets which are in the favor of magnifying the dosimetric effect.

Methods and Materials: An anthropomorphic phantom was used to simulate the patient with an arbitrary drawn cranial target, whose volume is equivalent to a 4 millimeter sphere. Single 360 ARC plans were generated with Eclipse external beam and cone based treatment planning system from Varian Medical System. For MLC based plan, the apertures fit to the structure with circle margins varying with 2mm, 3mm, 4mm, 5mm and 6mm. These setups were compared with the cones being selected to be 5mm, 10mm, 12mm, 14mm and 16mm in diameter. For the MLC based plan, the leaf-edge-contour meet points were selected to be in the middle. Jaw positions were used both recommend and optimize options, which are provided by the treatment planning system. Mean dose was treated as the prescription dose. Comparison of the two planning techniques was carried out using 12Gy Volume (V12Gy) from dose-volume histogram (DVH), maximum dose to the prescription dose ratio (MDPD), ratio PITV (PIV/TV), radiation conformity index (RCI), which is defined to be TVPIV/PIV, and an integrated conformity index (TVPIV 2/ (TVxPIV)), where PIV is the prescription isodose surface volume, TV is target volume, and TVPIV is the intersection of TV and the PIV.

Conclusions: For small target SRS, there are larger variations in V12Gy, PITV, and ICI in MLC based plan than those of cone based plan, while the difference is not significant for MDPD in both settings at the selected aperture sizes. These information could help in decision making through sensitivity study while sufficient clinical outcome information were available. The multiple ARC treatment plan and the clinical reality of algorithm for small aperture also need further investigation.