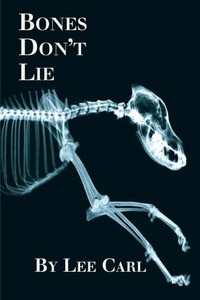 Bones Don't Lie is a story of murder and evolution. It tells the tale of Mark Blunt, a crusading young man who travels with his wife, Ivy, to the Bible Belt in an effort to teach evolution to religious fundamentalists.

His teaching leads to community unrest, arguments within families, student rebellion, a pastor's protests, angry school board meetings, and even murder.

When Mark and Ivy first arrive in tornado alley, they are greeted by dry grass, dusty farmland, a paint-bare dwelling, and a community where the word evolution scares residents nearly as much as a tornado warning. While fixing their property, which includes a house not unlike the farmhouse that carried Dorothy to the Land of Oz, their adventurous dog, Skipper, who likes to dig, brings home a human bone resulting in a mystery more troubling than Mark's episodes in the classroom.

Bones that reveal the truth play roles in each aspect of the novel -- modern-day murder and ancient evolutionary discoveries. The novel intersperses these elements and includes adventures and misadventures from student efforts to oust school board members to the barn-hanging suicide of a tormented descendant of the owner of the Bunt's property.