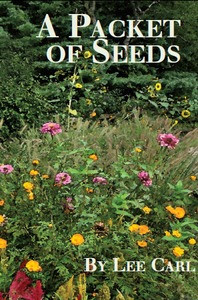 A Packet of Seeds

A Packet of Seeds is a love story entwined with a tale of murder. It is set on the Philadelphia Main Line where an heiress and socialite named Margaret Graham rules over an estate called Del Run, a castle-like mansion surrounded by a vast garden of flowers, trees, shrubs and shaded walkways.

Jason Oswald, a young horticultural student, arrives at Del Run to serve as an apprentice to the gardener, a 60-year-old man named Joe Mannino who has tended the estate's gardens most of his life. Jason is awed by the castle-like house and feels its mysterious pull long before he sees strange visitors come and go, long before he is spellbound by a young woman's beauty, long before he is horrified by bloody death. His curiosity slowly unearths the secrets of Del Run, including those long held by the old gardener.

Questions abound. What happened to Rufus Black, a young man who years ago worked at Del Run? Is the missing Chad Black his son, or is he the strange Lester Sturmeck in disguise?

Mannino's revelation that a baby boy mysteriously disappeared from Del Run leads Jason on a chase that reveals long unknown facts - including the truth about the missing boy, his whereabouts, and his relationship to Margaret Graham and her beautiful daughter, the growing passion of the young apprentice gardener. Jason's hunt also uncovers the real identity of the strange tattooed biker who often paid visits to Margaret Graham - visits that led to lies, the theft of gold, a bruising fight, and eventually the blood-curdling trapping of the murderer.

Lee Carl, former chairman of the Journalism Department at Temple University, is winner of the Norumbega Fiction Award for his novel, The Floor of T.P.'s Office. Former scholarship director at Temple, Carl taught journalism at that University for 25 years. Before joining the Temple faculty, he taught at Cornell University where he also directed the Press Service and received the Pioneer Ace Award as the number-one communicator among writers at land-grant universities in the Northeastern United States. He earned his Ph.D. degree at Syracuse University, his master's degree at the University of Houston, and his bachelor's degree at Temple. A recipient of Temple's Great Teacher Award, he also received the Lindback Foundation Award for distinguished teaching, the Stauffer Award for distinguished service, and the Dixon Award for inspiration. Carl's professional experience includes 15 years of newspaper reporting, editing and PR work.