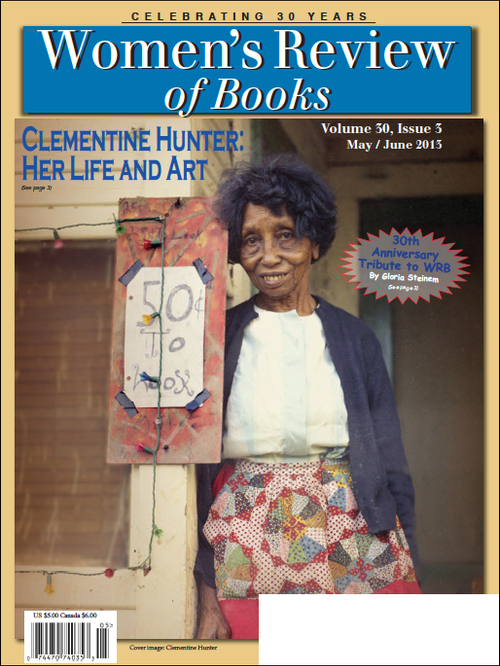 p. 3
Outside the Outsiders Clementine Hunter: Her Life and Art By Art Shriver and Tom Whitehead
Reviewed by Marilyn Richardson

p. 8
The Voice Stranger Magic: Charmed States and the Arabian Nights By Mariana Warner
When Women Were Birds: Fifty-Four Variations on Voice By Terry Tempest Williams
Reviewed by Rebecca Steinitz

p. 11
“What Does Henry Want?” Bring Up the Bodies By Hilary Mantel
Reviewed by Jessica Jernigan

p. 15
Essay Lesbians on the Move By Judy Grahn

p. 21
The History Beneath History Out of It By Selma Dabbagh
Of Noble Origins By Sahar Kahalifeh
Reviewed by M. Lynx Qualey

p. 23
The Organization In the Shadows of the Banyan By Vaddey Ratner
Reviewed by Marianne Villanueva

p. 25
The Authors of Their Lives NW By Zadie Smith
Reviewed by Susan Alice Fischer

p. 26
A Question of Safety The Round House By Louise Erdrich
Flight Behavior By Barbara Kingsolver
Reviewed by A. J. Verdell

p. 28
Funny Then, Funny Now We Killed: The Rise of Women in American Comedy: A Very Oral History By Yael Kohen
Reviewed by Roz Warren

p. 29
Who Would Jesus Deport? Immigration and Women: Understanding the American Experience By Susan C. Pearce, Elizabeth J. Clifford, and Reena Tandon
National Insecurities: Immigrants and US Deportation Policy Since 1882 By Deidre M. Moloney
“I Am an American”: Filming the Fear of Difference By Cynthia Weber
Reviewed by Katarzyna Marciniak