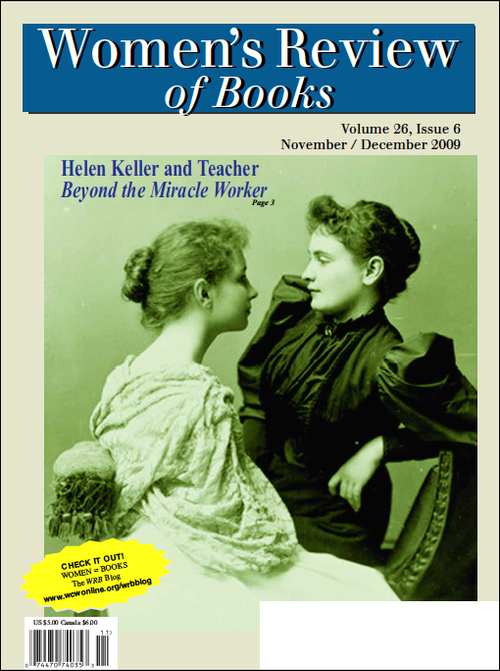 p. 3
The Teacher and the Student Beyond the Miracle Worker: The Remarkable Life of Anne Sullivan Macy and Her Extraordinary Friendship with Helen Keller By Kim Neilsen
Reviewed by Deborah Kent

p. 4
The Paella of Revolution To Change the World: My Years in Cuba By Margaret Randall
Reviewed by Minrose Gwin

p. 6
The Revolutionist The Woman Behind the New Deal: The Life of Frances Perkins, FDR’s Secretary of Labor and His Moral Conscience By Kirstin Downey
Reviewed by Susan Feiner

p. 14
Words Wrenched Out of Silence To Hell and Back: The Life of Samira Bellil By Samira Bellil, translated by Lucy R. McNair
Reviewed by Cécile Oumhani

p. 19
A Taste of Today’s Poets When She Named Fire: An Anthology of Contemporary Poetry by American Women Edited by Andrea Hollander Budy
Reviewed by Carol Bere

p. 20
Cooking and Eating Kitchen Literacy: How We Lost Knowledge of Where Food Comes From and Why We Need to Get It Back By Anne Vileisis
Reviewed by Jan Zita Grover

p. 22
The Growth of a Writer Triangular Road: A Memoir By Paule Marshall
Reviewed by Florence Ladd

p. 23
Hip Hop Warzones The Hip Hop Wars: What We Talk About When We Talk About Hip Hop—And Why It Matters By Tricia Rose
Pimps Up, Ho’s Down: Hip Hop’s Hold on Young Black Women By T. Denean Sharpley-Whiting
Reviewed by Latoya Peterson

p. 28
Religious Feminists Taking Back God: American Women Rising Up for Religious Equality By Leora Tanenbaum
Surprised by God: How I Learned to Stop Worrying and Love Religion By Danya Ruttenberg
Dating Jesus: A Story of Fundamentalism, Feminism, and the American Girl By Susan Campbell
A Dynamic God: Living an Unconventional Catholic Faith By Nancy Mairs
Reviewed by Ann Braude