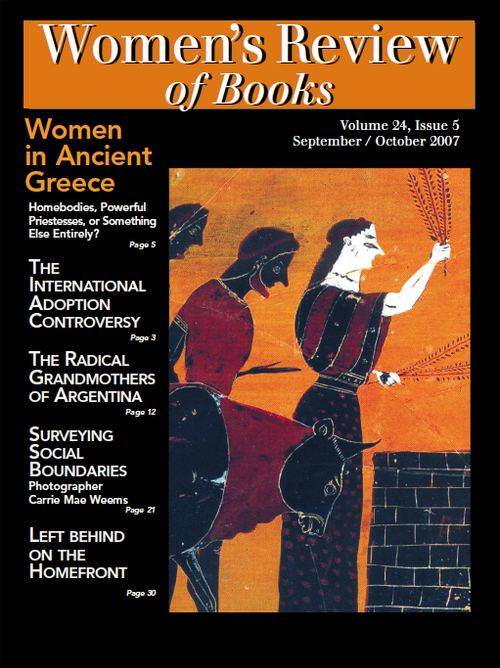 p. 5
Reinterpreting the Ancients Portrait of a Priestess: Women and Ritual in Ancient Greece By Joan Breton Connelly
Reviewed by Joy Connolly

p. 8
The Bush Countdown George W. Bush and the War on Women: Turning Back the Clock on Progress By Barbara Finlay
Reviewed by Renee Loth

p. 9
Equity and Difference The Constitution as Social Design: Gender and Civic Membership in the American Constitutional Order By Gretchen Ritter
Reviewed by Sandra F. VanBurkleo

p. 12
Essay “Do You Know Who You Are?” The Grandmothers of the Plaza De Mayo By Rita Arditti

p. 17
Heir to the Throne Intimate Politics: How I grew up Red, Fought for Free Speech, and Became a Feminist Rebel By Bettina F. Aptheker
Reviewed by Margaret Randall

p. 21
Poetry “The Isle of Echo Park” and “My Mothers” By Eloise Klein Healy

p. 23
Good Reads Downwinders
Road of Five Churches By Stephanie Dickinson, with illustrations by Michael Weston
Karma and Other Stories By Rishi Reddi
The Rope Walk By Carrie Brown
By Trish Crapo

p. 30
The Fires at Home While They’re at War: The True Story of American Families on the Homefront By Kristin Henderson
Under the Sabers: The Unwritten Code of Army Wives By Tanya Biank
Reviewed by Sandi E. Cooper