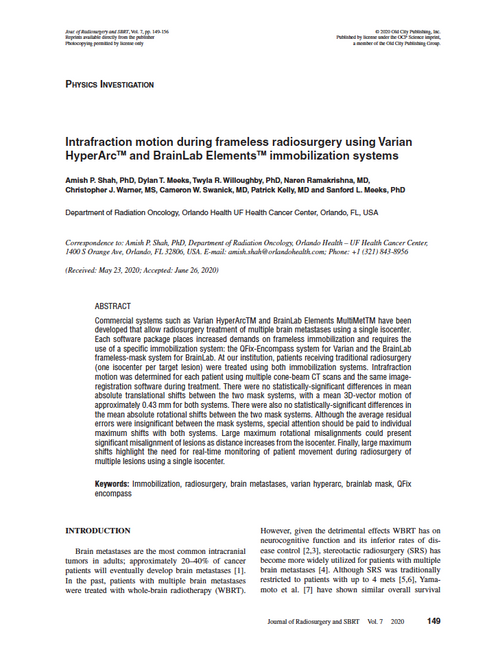 Commercial systems such as Varian HyperArc™ and BrainLab Elements MultiMet™ have been developed that allow radiosurgery treatment of multiple brain metastases using a single isocenter. Each software package places increased demands on frameless immobilization and requires the use of a specific immobilization system: the QFix-Encompass system for Varian and the BrainLab frameless-mask system for BrainLab. At our institution, patients receiving traditional radiosurgery (one isocenter per target lesion) were treated using both immobilization systems. Intrafraction motion was determined for each patient using multiple cone-beam CT scans and the same image-registration software during treatment. There were no statistically-significant differences in mean absolute translational shifts between the two mask systems, with a mean 3D-vector motion of approximately 0.43 mm for both systems. There were also no statistically-significant differences in the mean absolute rotational shifts between the two mask systems. Although the average residual errors were insignificant between the mask systems, special attention should be paid to individual maximum shifts with both systems. Large maximum rotational misalignments could present significant misalignment of lesions as distance increases from the isocenter. Finally, large maximum shifts highlight the need for real-time monitoring of patient movement during radiosurgery of multiple lesions using a single isocenter.