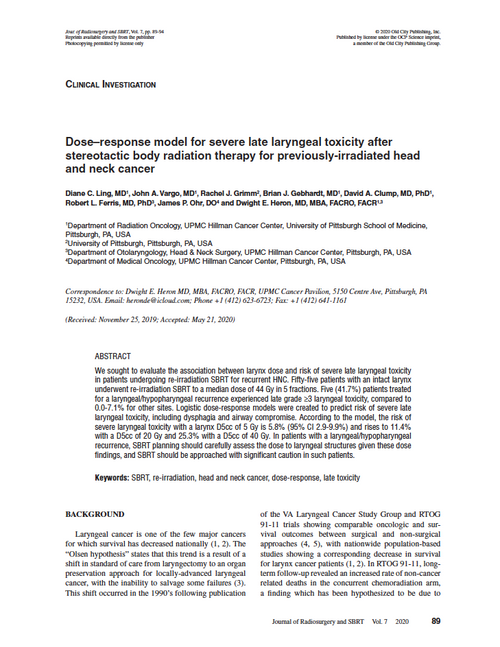 We sought to evaluate the association between larynx dose and risk of severe late laryngeal toxicity in patients undergoing re-irradiation SBRT for recurrent HNC. Fifty-five patients with an intact larynx underwent re-irradiation SBRT to a median dose of 44 Gy in 5 fractions. Five (41.7%) patients treated for a laryngeal/hypopharyngeal recurrence experienced late grade ≥3 laryngeal toxicity, compared to 0.0-7.1% for other sites. Logistic dose-response models were created to predict risk of severe late laryngeal toxicity, including dysphagia and airway compromise. According to the model, the risk of severe laryngeal toxicity with a larynx D5cc of 5 Gy is 5.8% (95% CI 2.9-9.9%) and rises to 11.4% with a D5cc of 20 Gy and 25.3% with a D5cc of 40 Gy. In patients with a laryngeal/hypopharyngeal recurrence, SBRT planning should carefully assess the dose to laryngeal structures given these dose findings, and SBRT should be approached with significant caution in such patients.