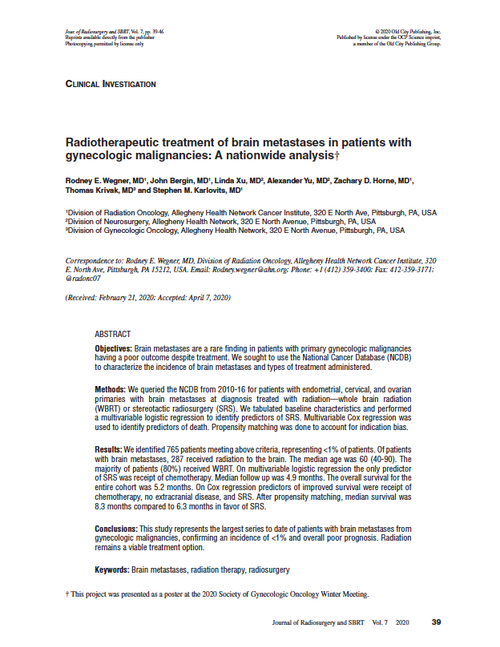 Objectives: Brain metastases are a rare finding in patients with primary gynecologic malignancies having a poor outcome despite treatment. We sought to use the National Cancer Database (NCDB) to characterize the incidence of brain metastases and types of treatment administered.

Methods: We queried the NCDB from 2010-16 for patients with endometrial, cervical, and ovarian primaries with brain metastases at diagnosis treated with radiation—whole brain radiation (WBRT) or stereotactic radiosurgery (SRS). We tabulated baseline characteristics and performed a multivariable logistic regression to identify predictors of SRS. Multivariable Cox regression was used to identify predictors of death. Propensity matching was done to account for indication bias.

Results: We identified 765 patients meeting above criteria, representing <1% of patients. Of patients with brain metastases, 287 received radiation to the brain. The median age was 60 (40-90). The majority of patients (80%) received WBRT. On multivariable logistic regression the only predictor of SRS was receipt of chemotherapy. Median follow up was 4.9 months. The overall survival for the entire cohort was 5.2 months. On Cox regression predictors of improved survival were receipt of chemotherapy, no extracranial disease, and SRS. After propensity matching, median survival was 8.3 months compared to 6.3 months in favor of SRS.

Conclusions: This study represents the largest series to date of patients with brain metastases from gynecologic malignancies, confirming an incidence of <1% and overall poor prognosis. Radiation remains a viable treatment option.