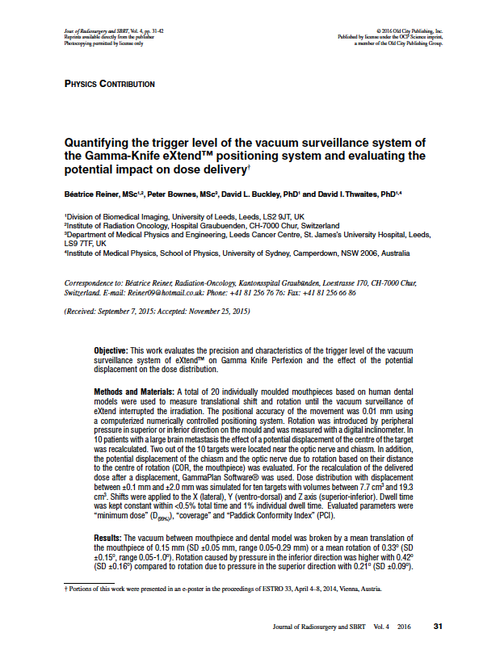 Objective: This work evaluates the precision and characteristics of the trigger level of the vacuum surveillance system of eXtend™ on Gamma Knife Perfexion and the effect of the potential displacement on the dose distribution.

Methods and Materials: A total of 20 individually moulded mouthpieces based on human dental models were used to measure translational shift and rotation until the vacuum surveillance of eXtend interrupted the irradiation. The positional accuracy of the movement was 0.01 mm using a computerized numerically controlled positioning system. Rotation was introduced by peripheral pressure in superior or inferior direction on the mould and was measured with a digital inclinometer. In 10 patients with a large brain metastasis the effect of a potential displacement of the centre of the target was recalculated. Two out of the 10 targets were located near the optic nerve and chiasm. In addition, the potential displacement of the chiasm and the optic nerve due to rotation based on their distance to the centre of rotation (COR, the mouthpiece) was evaluated. For the recalculation of the delivered dose after a displacement, GammaPlan Software® was used. Dose distribution with displacement between ±0.1 mm and ±2.0 mm was simulated for ten targets with volumes between 7.7 cm3 and 19.3 cm3. Shifts were applied to the X (lateral), Y (ventro-dorsal) and Z axis (superior-inferior). Dwell time was kept constant within <0.5% total time and 1% individual dwell time. Evaluated parameters were “minimum dose” (D(99%)), “coverage” and “Paddick Conformity Index” (PCI).

Conclusions: The trigger level is sensitive and reproducible. A sudden movement by the patient, such as an attempt to get out or correct an uncomfortable position would interrupt irradiation immediately. The dominant effect for a displacement is due to rotation. The resulting displacement depends on the distance between target and COR (magnitude) and the location (direction). Therefore, lesions near chiasm or brainstem, which are closer to the COR, are less affected from a rotation than peripheral targets.