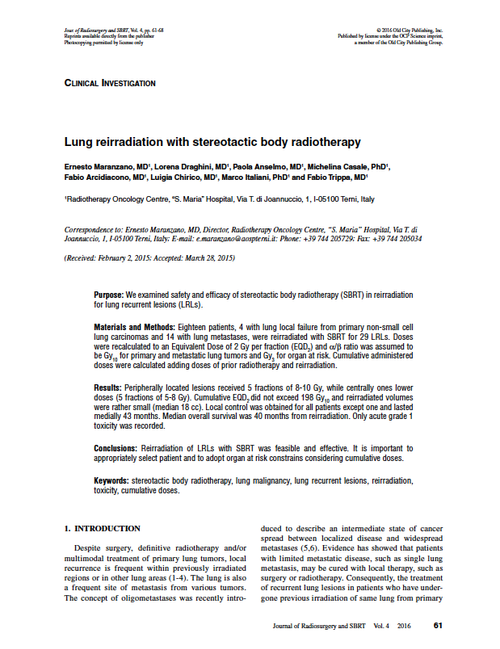 Materials and Methods: Eighteen patients, 4 with lung local failure from primary non-small cell lung carcinomas and 14 with lung metastases, were reirradiated with SBRT for 29 LRLs. Doses were recalculated to an Equivalent Dose of 2 Gy per fraction (EQD2) and a/b ratio was assumed to be Gy10 for primary and metastatic lung tumors and Gy3 for organ at risk. Cumulative administered doses were calculated adding doses of prior radiotherapy and reirradiation.

Results: Peripherally located lesions received 5 fractions of 8-10 Gy, while centrally ones lower doses (5 fractions of 5-8 Gy). Cumulative EQD2 did not exceed 198 Gy10 and re-irradiated volumes were rather small (median 18 cc). Local control was obtained for all patients except one and lasted medially 43 months. Median overall survival was 40 months from reirradiation. Only acute grade 1 toxicity was recorded.

Conclusions: Reirradiation of LRLs with SBRT was feasible and effective. It is important to appropriately select patient and to adopt organ at risk constrains considering cumulative doses.