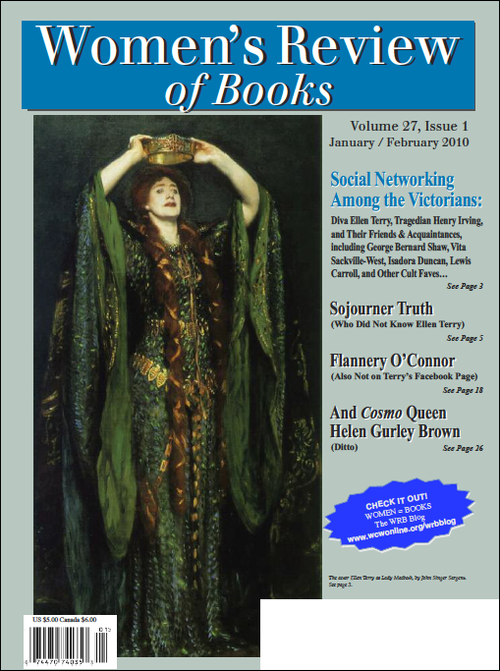 p. 8
“I Am Not the Wonderful Person I Was” The Lonely Soldier: The Private War of Women Serving in Iraq By Helen Benedict
Powder: Writing by Women in the Ranks, from Vietnam to Iraq Edited by Lisa Bowden and Shannon Cainq
Reviewed by: Jennifer G. Mathers

p. 12
The Captivity Narrative Redux The Blue Tattoo: The Life of Olive Oatman By Margot Mifflin
Reviewed by Siobhan Senier

p. 13
The Limits of Reform Addressing Rape Reform in Law and Practice By Susan Caringella
Reviewed by Marianne Wesson

p. 18
Between the House and the Chicken Yard Flannery: A Life of Flannery O’Connor By Brad Gooch
Reviewed by Kathryn McKee

p. 20
Good Reads All Day Reading
A Long, Long Time Ago and Essentially True By Brigid Pasulka
Atlas of the Unknowns By Tania James
The Edge of Eden Helen Benedict
The Little Stranger By Sarah Waters
Reviewed by Trish Crapo

p. 28
The Child is the Mother to the Homo Sapiens Mothers and Others: The Evolution Origins of Mutual Understanding By Sarah Blafer Hrdy
Reviewed by Adrienne Zihlman