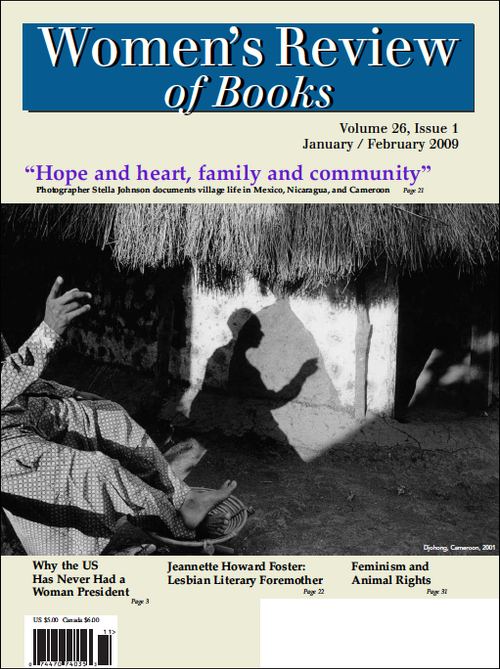 p. 3
Where are the Women? Women for President: Media Bias in Eight Campaigns By Erika Falk
Reviewed by Ruth Rosen

p. 6
Bridging the Chasm The Bishop’s Daughter: A Memoir By Honor Moore
Reviewed by Catherine Mooney

p. 19
Good Reads The Benefits of Hindsight
Telex from Cuba By Rachel Kushner
The Size of the World By Joan Silber
Our Lady of the Artichokes By Katherine Vaz
Reviewed by Trish Crapo

p. 21
Photography In the Tradition of Women Redefining the World: Photographs by Stella Johnson By Magdalen Pierrakos

p. 22
Of Her Time and Ahead of It Sex Variant Woman:The Life of Jeannette Howard Foster By Joanne Passet
Reviewed by Martha Vicinus

p. 23
Founding Mothers Prodigal Daughters: Susanna Rowson’s Early American Women By Marion Rust
The Muse of the Revolution: The Secret Pen of Mercy Otis Warren and the Founding of a Nation By Nancy Rubin Stuart
Reviewed by Martha Saxton

p. 28
A Dialogue of the Sources Women Poets on Mentorship: Efforts and Affections Edited by Arielle Greenberg and Rachel Zucker
Reviewed by Sandra Yannone

p. 29
The Second-Best Bed and Other Conundrums Shakespeare’s Wife By Germaine Greer
Reviewed by Marilyn Yalom