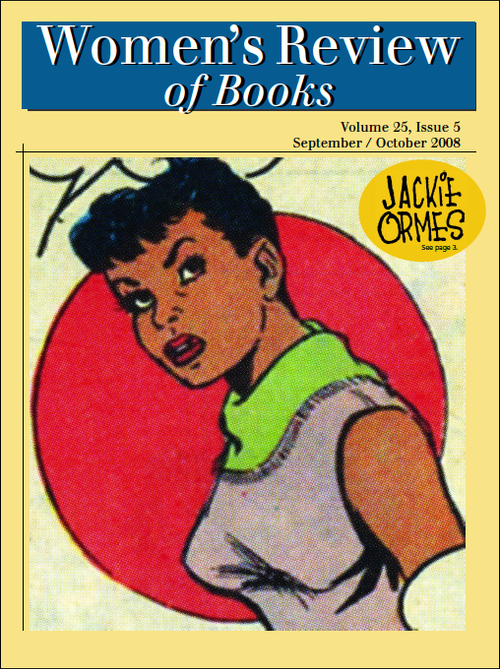 p. 5
Can’t Live With It, Can’t Live Without It Moving Mountains: How One Woman and Her Community Won Justice from Big Coal By Penny Loeb
Reviewed by Liza Featherstone

p. 6
Opting For the Air Conditioning The Sexual Paradox: Men, Women, and the Real Gender Gap By Susan Pinker
Reviewed by Caryl Rivers and Rosalind Barnett

p. 12
The Shiver of Possibility The Plague of Doves By Louise Erdrich
Reviewed by Margaret Noori

p. 13
Scrubwomen of Truth Telephone Ringing in the Labyrinth: Poems 2004-2006 By Adrienne Rich; My Body: New and Selected Poems By Joan Larkin
Reviewed by Alicia Ostriker

p. 18
Good Reads Balancing on the Pacific Rim and Other Travelers’ Tales
The End of Manners By Francesca Marciano
Steer Toward Rock By Fae Myenne Ng
The House on Fortune Street By Margot Livesey
Reviewed by Valerie Miner

p. 19
Out of the Habit Habits of Compassion: Irish Catholic Nuns and the Origins of New York’s Welfare System, 1830-1920 By Maureen Fitzgerald
Good Hearts: Catholic Sister in Chicago’s Past By Suellen Hoy
Double Crossed: Uncovering the Catholic Church’s Betrayal of American Nuns By Kenneth Briggs
Reviewed by Catherine M. Mooney

p. 21
Bringing Up Baby Valuing Children: Rethinking the Economics of the Family By Nancy Folbre
Who Cares for Our Children? The Child Care Crisis in the Other America By Valerie Polakow
Reviewed by Martha Nichols

p. 23
A Culture of Female Talent The Talented Women of the Zhang Family By Susan Mann
Reviewed by Ellen Widmer

p. 27
Affection for the World Shelter Half By Carol Bly
Reviewed by Judith Niemi

p. 30
Out of Sight, Out of Mind Women Behind Bars: The Crisis of Women in the US Prison System By Silja J.A. Talvi
Wretched Sisters: Examining Gender and Capital Punishment By Mary Welek Atwell
Reviewed by Karin Aguilar-San Juan