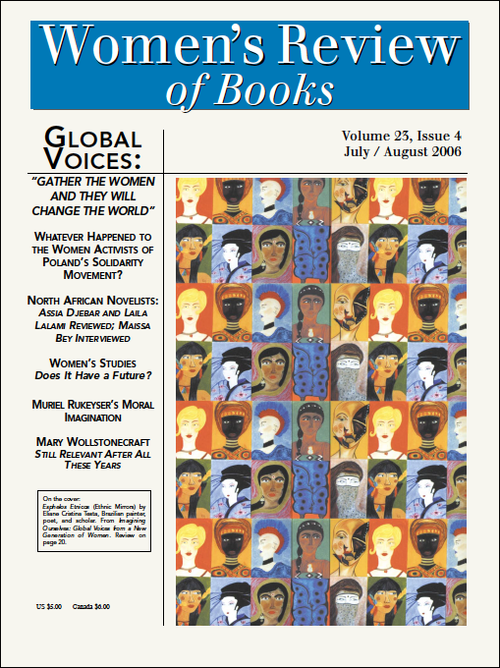 p. 3
Dreams Fulfilled And Betrayed Children of the New World: A Novel of the Algerian War By Assia Djebar
Hope and Other Dangerous Pursuits By Laila Lalami
Reviewed by Nadia Boudidah Falfoul

p. 14
The Priests Were Women The Woman in the Shaman’s Body: Reclaiming the Feminine in Religion and Medicine By Barbara Tedlock
Reviewed by Serinity Young

p. 18
Field Notes Poetry And Poetry
May Sarton to Valeria Knapp: Letters and Poems to a Secret Muse Edited with an Introduction by Mary Chenoweth Stratton
Reviewed by Michelle Boisseau

p. 21
The Male Obsession Hung: A Meditation on the Measurement of Black Men in America By Scott Poulson-Bryant
Reviewed by Deborah Bolling

p. 23
A Becky Sharpe Kind Of Life The Story of Chicago May By Nuala O’Faolain
Reviewed by Lauren Byrne

p. 24
Gender And Everything Else Their Right to Speak: Women’s Activism in the Indian and Slave Debates By Alisse Portnoy
Reviewed by Jacqueline Bacon

p. 26
Our Computing Kin My Mother Was a Computer: Digital Subjects and Literary Texts By N. Katherine Hayles
Reviewed by Mara Mills