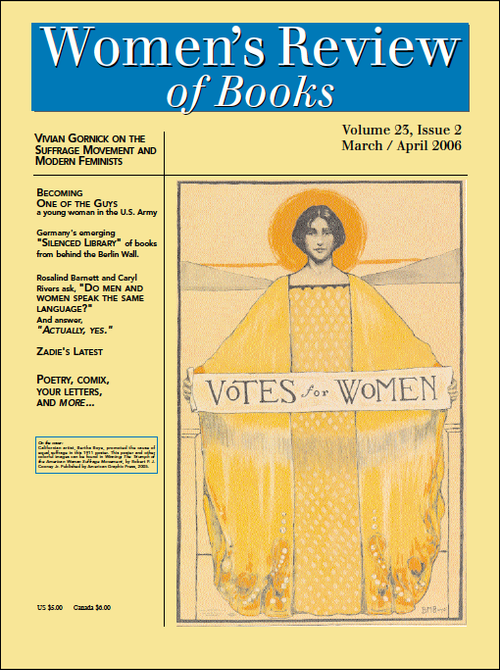 p. 3
One Of The Boys Love My Rifle More Than You: Young and Female in the U.S. Army By Kayla Williams with Michael E. Straub
Reviewed by Carol Burke

p. 15
Essay Men and Women are from Earth By Rosalind Barnett and Caryl Rivers

p. 17
Up And Down On The Work-Parenting Carousel The Truth Behind the Mommy Wars: Who Decides What Makes a Good Mother By Miriam Peskowitz
Parenting and Professing: Balancing Family Work with an Academic Career Edited by Rachel Hile Bassett
Reviewed by Heather Hewett

p. 20
Women Gone Wild Female Chauvinist Pigs: Women and the Rise of Raunch Culture By Ariel Levy
Pornified: How Pornography Is Transforming Our Lives, Our Relationships, and Our FamiliesBy Pamela Paul
Reviewed by Leora Tanenbaum

p. 24
The Secret Of The Missing Author Girl Sleuth: Nancy Drew and the Women Who Created Her By Melanie Rehak
Reviewed by Nan Cinnater

p. 27
Brazil Beyond The Borders First World Third Class and Other Tales of the Global Mix By Regina Rheda
Reviewed by Marguerite Itamar Harrison

p. 28
The Power Of Secrets Captain of the Sleepers By Mayra Montero
Reviewed by Hilda Lloréns

p. 30
The Shelter Of Each Other On Beauty By Zadie Smith
Reviewed by Susan Alice Fisher