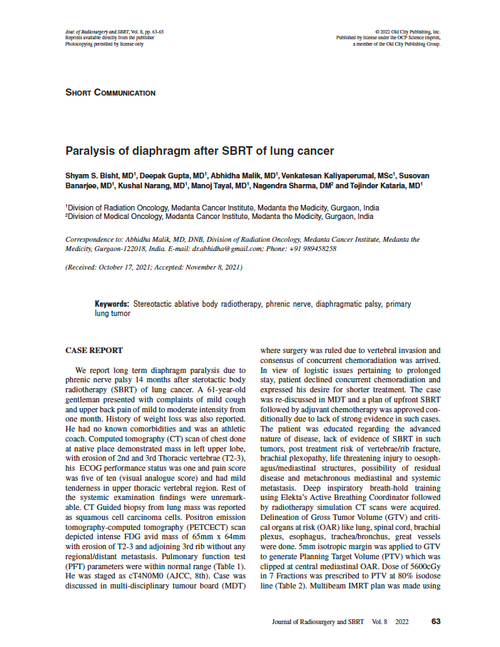 We report long term diaphragm paralysis due to phrenic nerve palsy 14 months after sterotactic body radiotherapy (SBRT) of lung cancer. A 61-year-old gentleman presented with complaints of mild cough and upper back pain of mild to moderate intensity from one month. History of weight loss was also reported. He had no known comorbidities and was an athletic coach. Computed tomography (CT) scan of chest done at native place demonstrated mass in left upper lobe, with erosion of 2nd and 3rd Thoracic vertebrae (T2-3), his ECOG performance status was one and pain score was five of ten (visual analogue score) and had mild tenderness in upper thoracic vertebral region. Rest of the systemic examination findings were unremarkable. CT Guided biopsy from lung mass was reported as squamous cell carcinoma cells. Positron emission tomography-computed tomography (PETCECT) scan depicted intense FDG avid mass of 65mm x 64mm with erosion of T2-3 and adjoining 3rd rib without any regional/distant metastasis. Pulmonary function test (PFT) parameters were within normal range (Table 1). He was staged as cT4N0M0 (AJCC, 8th). Case was discussed in multi-disciplinary tumour board (MDT) where surgery was ruled due to vertebral invasion and consensus of concurrent chemoradiation was arrived. In view of logistic issues pertaining to prolonged stay, patient declined concurrent chemoradiation and expressed his desire for shorter treatment. The case was re-discussed in MDT and a plan of upfront SBRT followed by adjuvant chemotherapy was approved conditionally due to lack of strong evidence in such cases. The patient was educated regarding the advanced nature of disease, lack of evidence of SBRT in such tumors, post treatment risk of vertebrae/rib fracture, brachial plexopathy, life threatening injury to oesophagus/mediastinal structures, possibility of residual disease and metachronous mediastinal and systemic metastasis. Deep inspiratory breath-hold training using Elekta’s Active Breathing Coordinator followed by radiotherapy simulation CT scans were acquired. Delineation of Gross Tumor Volume (GTV) and critical organs at risk (OAR) like lung, spinal cord, brachial plexus, esophagus, trachea/bronchus, great vessels were done. 5mm isotropic margin was applied to GTV to generate Planning Target Volume (PTV) which was clipped at central mediastinal OAR. Dose of 5600cGy in 7 Fractions was prescribed to PTV at 80% isodose line (Table 2). Multibeam IMRT plan was made using Monte Carlo algorithm on Monaco treatment planning station. Appropriate plan was selected, and treatment was delivered in 7 consecutive days, excluding Sunday. Only grade II dermatitis (RTOG) observed over back at 2 weeks and was advised to review for adjuvant chemotherapy at 4weeks. The patient returned after 8 weeks of SBRT completion and whole body PETCT scan demonstrated complete metabolic response in primary tumor and no evidence of regional or systemic metastasis. Clinically there was significant improvement in back pain (2/10) with no fresh complaints. As previously planned, patient received 6 cycles of chemotherapy (Gemcitabine/Carboplatin). Subsequent PETCT scan was unremarkable till June 2020 which showed elevation of left hemidiaphragm, highly suggestive of diaphragmatic palsy. After excluding all causes of palsy, it was concluded to be a complication of phrenic nerve injury post SBRT (Figure 1). PFT was repeated and the parameters, although lower, were still within normal range (Table 1). Patient is on regular follow-up with no respiratory compromise and recent PETCT scan of August 2021 shows no evidence of disease anywhere in the body.