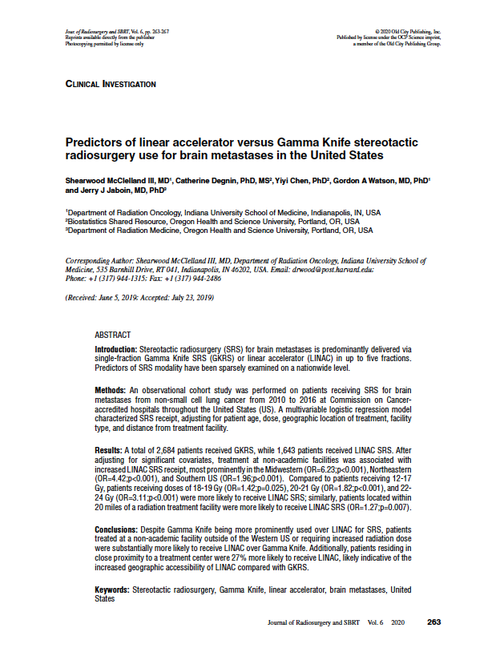 Introduction: Stereotactic radiosurgery (SRS) for brain metastases is predominantly delivered via single-fraction Gamma Knife SRS (GKRS) or linear accelerator (LINAC) in up to five fractions. Predictors of SRS modality have been sparsely examined on a nationwide level.

Methods: An observational cohort study was performed on patients receiving SRS for brain metastases from non-small cell lung cancer from 2010 to 2016 at Commission on Cancer-accredited hospitals throughout the United States (US). A multivariable logistic regression model characterized SRS receipt, adjusting for patient age, dose, geographic location of treatment, facility type, and distance from treatment facility.

Conclusions: Despite Gamma Knife being more prominently used over LINAC for SRS, patients treated at a non-academic facility outside of the Western US or requiring increased radiation dose were substantially more likely to receive LINAC over Gamma Knife. Additionally, patients residing in close proximity to a treatment center were 27% more likely to receive LINAC, likely indicative of the increased geographic accessibility of LINAC compared with GKRS.