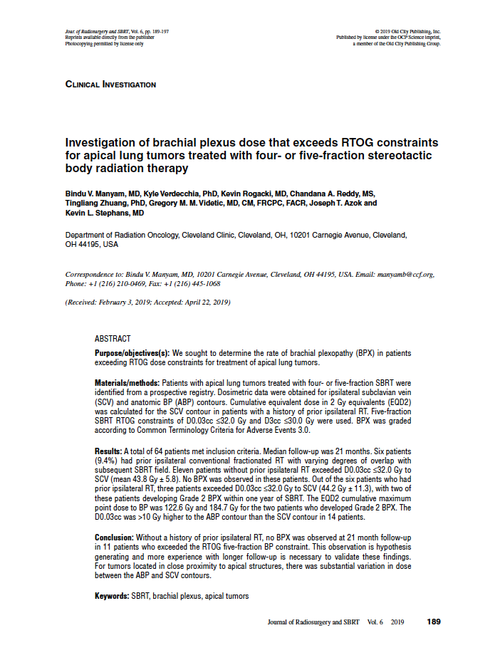 Purpose/objectives(s): We sought to determine the rate of brachial plexopathy (BPX) in patients exceeding RTOG dose constraints for treatment of apical lung tumors.

Materials/methods: Patients with apical lung tumors treated with four- or five-fraction SBRT were identified from a prospective registry. Dosimetric data were obtained for ipsilateral subclavian vein (SCV) and anatomic BP (ABP) contours. Cumulative equivalent dose in 2 Gy equivalents (EQD2) was calculated for the SCV contour in patients with a history of prior ipsilateral RT. Five-fraction SBRT RTOG constraints of D0.03cc ≤32.0 Gy and D3cc ≤30.0 Gy were used. BPX was graded according to Common Terminology Criteria for Adverse Events 3.0.

Results: A total of 64 patients met inclusion criteria. Median follow-up was 21 months. Six patients (9.4%) had prior ipsilateral conventional fractionated RT with varying degrees of overlap with subsequent SBRT field. Eleven patients without prior ipsilateral RT exceeded D0.03cc ≤32.0 Gy to SCV (mean 43.8 Gy ± 5.8). No BPX was observed in these patients. Out of the six patients who had prior ipsilateral RT, three patients exceeded D0.03cc ≤32.0 Gy to SCV (44.2 Gy ± 11.3), with two of these patients developing Grade 2 BPX within one year of SBRT. The EQD2 cumulative maximum point dose to BP was 122.6 Gy and 184.7 Gy for the two patients who developed Grade 2 BPX. The D0.03cc was >10 Gy higher to the ABP contour than the SCV contour in 14 patients.

Conclusion: Without a history of prior ipsilateral RT, no BPX was observed at 21-month follow-up in 11 patients who exceeded the RTOG five-fraction BP constraint. This observation is hypothesis-generating and more experience with longer follow-up is necessary to validate these findings. For tumors located in close proximity to apical structures, there was substantial variation in dose between the ABP and SCV contours.