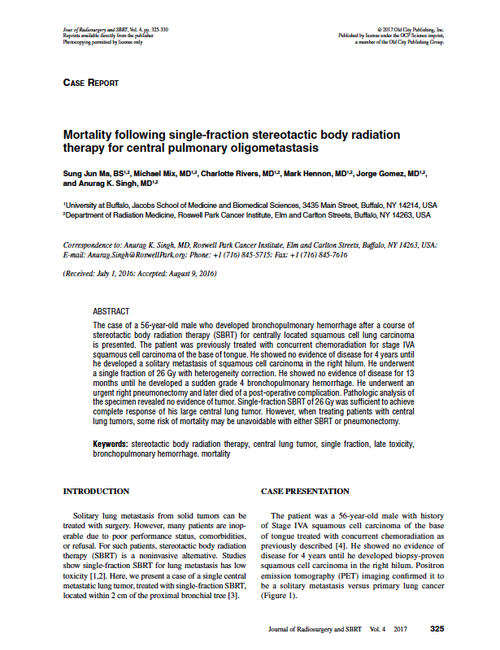 The case of a 56-year-old male who developed bronchopulmonary hemorrhage after a course of stereotactic body radiation therapy (SBRT) for centrally located squamous cell lung carcinoma is presented. The patient was previously treated with concurrent chemoradiation for stage IVA squamous cell carcinoma of the base of tongue. He showed no evidence of disease for 4 years until he developed a solitary metastasis of squamous cell carcinoma in the right hilum. He underwent a single fraction of 26 Gy with heterogeneity correction. He showed no evidence of disease for 13 months until he developed a sudden grade 4 bronchopulmonary hemorrhage. He underwent an urgent right pneumonectomy and later died of a post-operative complication. Pathologic analysis of the specimen revealed no evidence of tumor. Single-fraction SBRT of 26 Gy was sufficient to achieve complete response of his large central lung tumor. However, when treating patients with central lung tumors, some risk of mortality may be unavoidable with either SBRT or pneumonectomy.