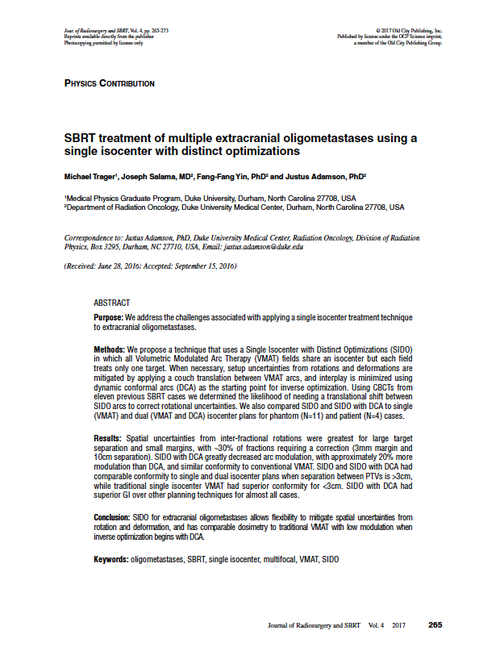 Purpose: We address the challenges associated with applying a single isocenter treatment technique to extracranial oligometastases.

Methods: We propose a technique that uses a Single Isocenter with Distinct Optimizations (SIDO) in which all Volumetric Modulated Arc Therapy (VMAT) fields share an isocenter but each field treats only one target. When necessary, setup uncertainties from rotations and deformations are mitigated by applying a couch translation between VMAT arcs, and interplay is minimized using dynamic conformal arcs (DCA) as the starting point for inverse optimization. Using CBCTs from eleven previous SBRT cases we determined the likelihood of needing a translational shift between SIDO arcs to correct rotational uncertainties. We also compared SIDO and SIDO with DCA to single (VMAT) and dual (VMAT and DCA) isocenter plans for phantom (N=11) and patient (N=4) cases.

Results: Spatial uncertainties from inter-fractional rotations were greatest for large target separation and small margins, with ~30% of fractions requiring a correction (3mm margin and 10cm separation). SIDO with DCA greatly decreased arc modulation, with approximately 20% more modulation than DCA, and similar conformity to conventional VMAT. SIDO and SIDO with DCA had comparable conformity to single and dual isocenter plans when separation between PTVs is >3cm, while traditional single isocenter VMAT had superior conformity for

Conclusion: SIDO for extracranial oligometastases allows flexibility to mitigate spatial uncertainties from rotation and deformation, and has comparable dosimetry to traditional VMAT with low modulation when inverse optimization begins with DCA.