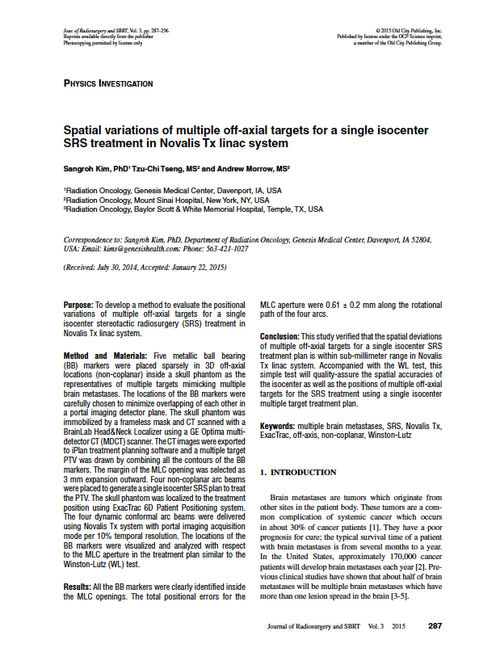 Method and Materials: Five metallic ball bearing (BB) markers were placed sparsely in 3D off-axial locations (non-coplanar) inside a skull phantom as the representatives of multiple targets mimicking multiple brain metastases. The locations of the BB markers were carefully chosen to minimize overlapping of each other in a portal imaging detector plane. The skull phantom was immobilized by a frameless mask and CT scanned with a BrainLab Head&Neck Localizer using a GE Optima multidetector CT (MDCT) scanner. The CT images were exported to iPlan treatment planning software and a multiple target PTV was drawn by combining all the contours of the BB markers. The margin of the MLC opening was selected as 3 mm expansion outward. Four non-coplanar arc beams were placed to generate a single isocenter SRS plan to treat the PTV. The skull phantom was localized to the treatment position using ExacTrac 6D Patient Positioning system. The four dynamic conformal arc beams were delivered using Novalis Tx system with portal imaging acquisition mode per 10% temporal resolution. The locations of the BB markers were visualized and analyzed with respect to the MLC aperture in the treatment plan similar to the Winston-Lutz (WL) test.

Results: All the BB markers were clearly identified inside the MLC openings. The total positional errors for the MLC aperture were 0.61 ± 0.2 mm along the rotational path of the four arcs.

Conclusion: This study verified that the spatial deviations of multiple off-axial targets for a single isocenter SRS treatment plan is within sub-millimeter range in Novalis Tx linac system. Accompanied with the WL test, this simple test will quality-assure the spatial accuracies of the isocenter as well as the positions of multiple off-axial targets for the SRS treatment using a single isocenter multiple target treatment plan.