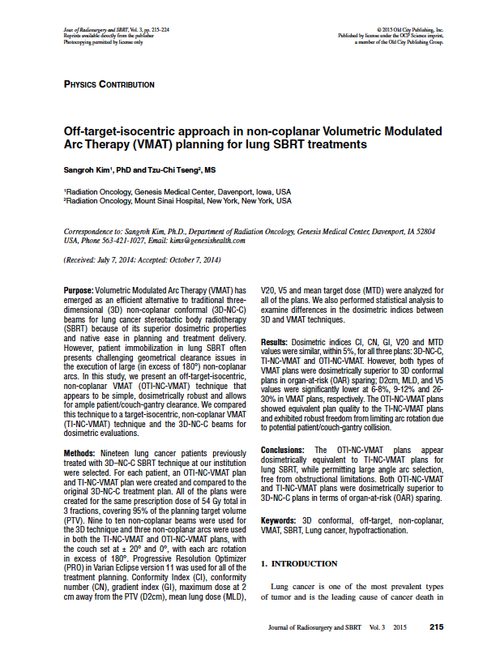 Purpose: Volumetric Modulated Arc Therapy (VMAT) has emerged as an efficient alternative to traditional threedimensional (3D) non-coplanar conformal (3D-NC-C) beams for lung cancer stereotactic body radiotherapy (SBRT) because of its superior dosimetric properties and native ease in planning and treatment delivery. However, patient immobilization in lung SBRT often presents challenging geometrical clearance issues in the execution of large (in excess of 180°) non-coplanar arcs. In this study, we present an off-target-isocentric, non-coplanar VMAT (OTI-NC-VMAT) technique that appears to be simple, dosimetrically robust and allows for ample patient/couch-gantry clearance. We compared this technique to a target-isocentric, non-coplanar VMAT (TI-NC-VMAT) technique and the 3D-NC-C beams for dosimetric evaluations.

Methods: Nineteen lung cancer patients previously treated with 3D–NC-C SBRT technique at our institution were selected. For each patient, an OTI-NC-VMAT plan and TI-NC-VMAT plan were created and compared to the original 3D-NC-C treatment plan. All of the plans were created for the same prescription dose of 54 Gy total in 3 fractions, covering 95% of the planning target volume (PTV). Nine to ten non-coplanar beams were used for the 3D technique and three non-coplanar arcs were used in both the TI-NC-VMAT and OTI-NC-VMAT plans, with the couch set at ± 20° and 0°, with each arc rotation in excess of 180°. Progressive Resolution Optimizer (PRO) in Varian Eclipse version 11 was used for all of the treatment planning. Conformity Index (CI), conformity number (CN), gradient index (GI), maximum dose at 2 cm away from the PTV (D2cm), mean lung dose (MLD), V20, V5 and mean target dose (MTD) were analyzed for all of the plans. We also performed statistical analysis to examine differences in the dosimetric indices between 3D and VMAT techniques.

Results: Dosimetric indices CI, CN, GI, V20 and MTD values were similar, within 5%, for all three plans: 3D-NC-C, TI-NC-VMAT and OTI-NC-VMAT. However, both types of VMAT plans were dosimetrically superior to 3D conformal plans in organ-at-risk (OAR) sparing; D2cm, MLD, and V5 values were significantly lower at 6-8%, 9-12% and 26- 30% in VMAT plans, respectively. The OTI-NC-VMAT plans showed equivalent plan quality to the TI-NC-VMAT plans and exhibited robust freedom from limiting arc rotation due to potential patient/couch-gantry collision.