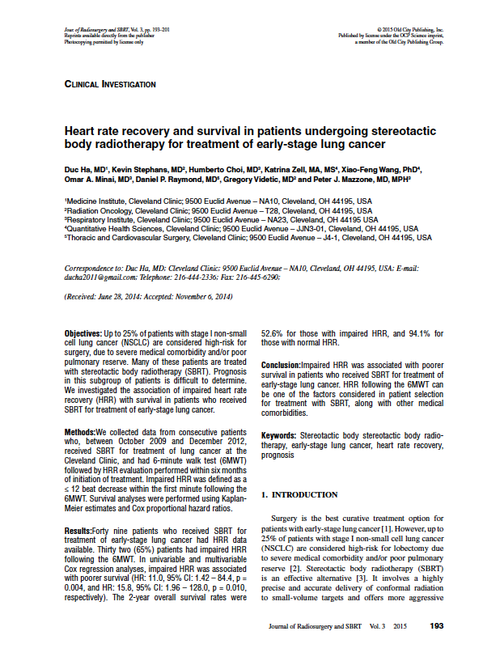 Objectives: Up to 25% of patients with stage I non-small cell lung cancer (NSCLC) are considered high-risk for surgery, due to severe medical comorbidity and/or poor pulmonary reserve. Many of these patients are treated with stereotactic body radiotherapy (SBRT). Prognosis in this subgroup of patients is difficult to determine. We investigated the association of impaired heart rate recovery (HRR) with survival in patients who received SBRT for treatment of early-stage lung cancer.

Methods: We collected data from consecutive patients who, between October 2009 and December 2012, received SBRT for treatment of lung cancer at the Cleveland Clinic, and had 6-minute walk test (6MWT) followed by HRR evaluation performed within six months of initiation of treatment. Impaired HRR was defined as a ≤ 12 beat decrease within the first minute following the 6MWT. Survival analyses were performed using Kaplan- Meier estimates and Cox proportional hazard ratios.

Conclusion: Impaired HRR was associated with poorer survival in patients who received SBRT for treatment of early-stage lung cancer. HRR following the 6MWT can be one of the factors considered in patient selection for treatment with SBRT, along with other medical comorbidities.