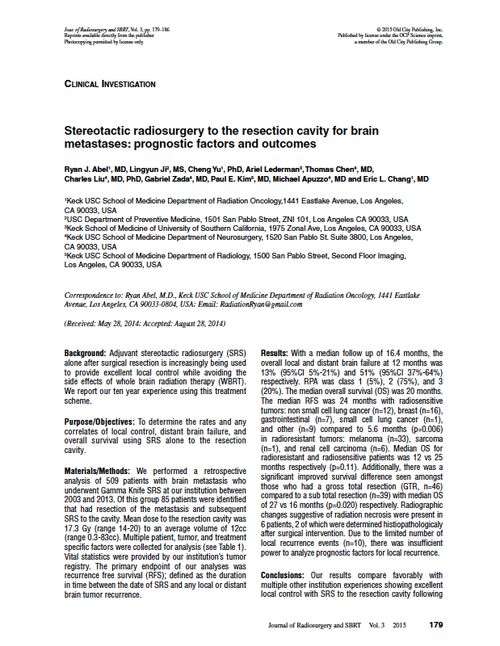 Purpose/Objectives: To determine the rates and any correlates of local control, distant brain failure, and overall survival using SRS alone to the resection cavity.

Materials/Methods: We performed a retrospective analysis of 509 patients with brain metastasis who underwent Gamma Knife SRS at our institution between 2003 and 2013. Of this group 85 patients were identified that had resection of the metastasis and subsequent SRS to the cavity. Mean dose to the resection cavity was 17.3 Gy (range 14-20) to an average volume of 12cc (range 0.3-83cc). Multiple patient, tumor, and treatment specific factors were collected for analysis (see Table 1). Vital statistics were provided by our institution’s tumor registry. The primary endpoint of our analyses was recurrence free survival (RFS); defined as the duration in time between the date of SRS and any local or distant brain tumor recurrence.

Results: With a median follow up of 16.4 months, the overall local and distant brain failure at 12 months was 13% (95%CI 5%-21%) and 51% (95%CI 37%-64%) respectively. RPA was class 1 (5%), 2 (75%), and 3 (20%). The median overall survival (OS) was 20 months. The median RFS was 24 months with radiosensitive tumors: non small cell lung cancer (n=12), breast (n=16), gastrointestinal (n=7), small cell lung cancer (n=1), and other (n=9) compared to 5.6 months (p=0.006) in radioresistant tumors: melanoma (n=33), sarcoma (n=1), and renal cell carcinoma (n=6). Median OS for radioresistant and radiosensitive patients was 12 vs 25 months respectively (p=0.11). Additionally, there was a significant improved survival difference seen amongst those who had a gross total resection (GTR, n=46) compared to a sub total resection (n=39) with median OS of 27 vs 16 months (p=0.020) respectively. Radiographic changes suggestive of radiation necrosis were present in 6 patients, 2 of which were determined histiopathologicaly after surgical intervention. Due to the limited number of local recurrence events (n=10), there was insufficient power to analyze prognostic factors for local recurrence.

Conclusions: Our results compare favorably with multiple other institution experiences showing excellent local control with SRS to the resection cavity following resection. Radioresistant histologies were associated with a worse RFS. Patients undergoing GTR had a significantly longer OS than those with STR. At our institution we continue to offer patients SRS to the resection cavity for those with good performance status and limited brain metastases.