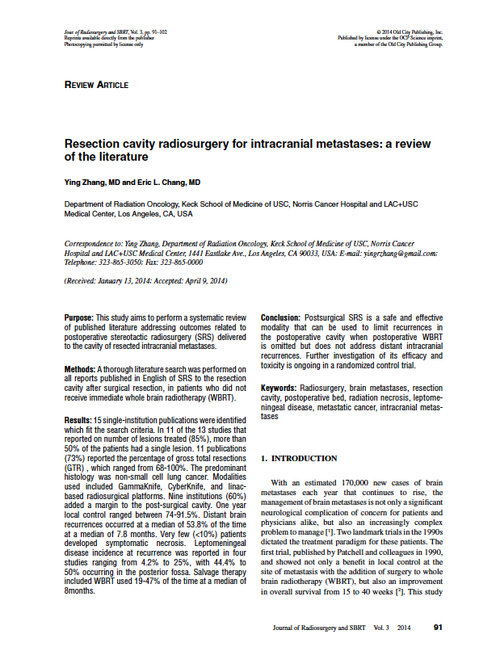 Methods: A thorough literature search was performed on all reports published in English of SRS to the resection cavity after surgical resection, in patients who did not receive immediate whole brain radiotherapy (WBRT).

Results: 15 single-institution publications were identified which fit the search criteria. In 11 of the 13 studies that reported on number of lesions treated (85%), more than 50% of the patients had a single lesion. 11 publications (73%) reported the percentage of gross total resections(GTR), which ranged from 68-100%. The predominant histology was non-small cell lung cancer. Modalities used included GammaKnife, CyberKnife, and linac-based radio-surgical platforms. Nine institutions (60%) added a margin to the post-surgical cavity. One year local control ranged between 74-91.5%. Distant brain recurrences occurred at a median of 53.8% of the time at a median of 7.8 months. Very few (<10%) patients developed symptomatic necrosis. Leptomeningeal disease incidence at recurrence was reported in four studies ranging from 4.2% to 25%, with 44.4% to 50% occurring in the posterior fossa. Salvage therapy included WBRT used 19-47% of the time at a median of 8 months.

Conclusion: Postsurgical SRS is a safe and effective modality that can be used to limit recurrences in the postoperative cavity when postoperative WBRT is omitted but does not address distant intracranial recurrences. Further investigation of its efficacy and toxicity is ongoing in a randomized control trial.