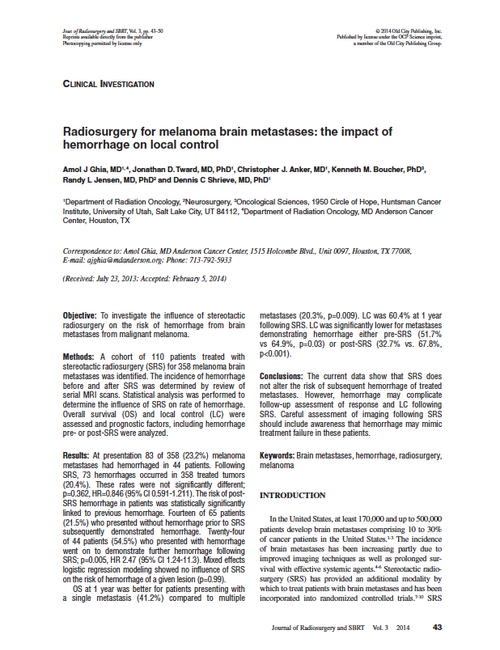 Objective: To investigate the influence of stereotactic radiosurgery on the risk of hemorrhage from brain metastases from malignant melanoma.

Methods: A cohort of 110 patients treated with stereotactic radiosurgery (SRS) for 358 melanoma brain metastases was identified. The incidence of hemorrhage before and after SRS was determined by review of serial MRI scans. Statistical analysis was performed to determine the influence of SRS on rate of hemorrhage. Overall survival (OS) and local control (LC) were assessed and prognostic factors, including hemorrhage pre- or post-SRS were analyzed.

Results: At presentation 83 of 358 (23.2%) melanoma metastases had hemorrhaged in 44 patients. Following SRS, 73 hemorrhages occurred in 358 treated tumors (20.4%). These rates were not significantly different; p=0.362, HR=0.846 (95% CI 0.591-1.211). The risk of post- SRS hemorrhage in patients was statistically significantly linked to previous hemorrhage. Fourteen of 65 patients (21.5%) who presented without hemorrhage prior to SRS subsequently demonstrated hemorrhage. Twenty-four of 44 patients (54.5%) who presented with hemorrhage went on to demonstrate further hemorrhage following SRS; p=0.005, HR 2.47 (95% CI 1.24-11.3). Mixed effects logistic regression modeling showed no influence of SRS on the risk of hemorrhage of a given lesion (p=0.99).