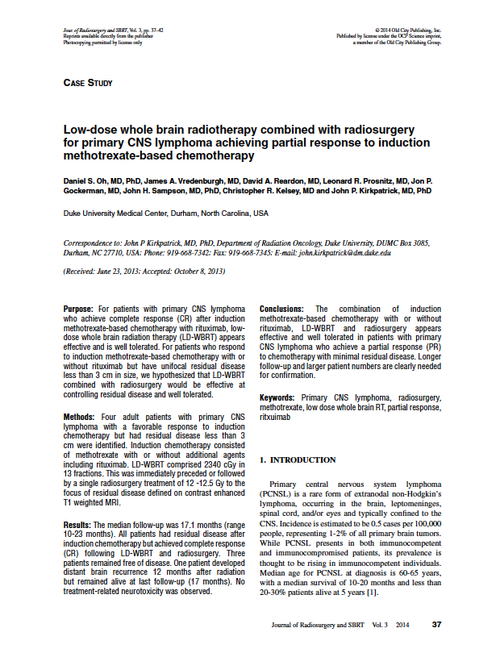 Purpose: For patients with primary CNS lymphoma who achieve complete response (CR) after induction methotrexate-based chemotherapy with rituximab, lowdose whole brain radiation therapy (LD-WBRT) appears effective and is well tolerated. For patients who respond to induction methotrexate-based chemotherapy with or without rituximab but have unifocal residual disease less than 3 cm in size, we hypothesized that LD-WBRT combined with radiosurgery would be effective at controlling residual disease and well tolerated.

Methods: Four adult patients with primary CNS lymphoma with a favorable response to induction chemotherapy but had residual disease less than 3 cm were identified. Induction chemotherapy consisted of methotrexate with or without additional agents including rituximab. LD-WBRT comprised 2340 cGy in 13 fractions. This was immediately preceded or followed by a single radiosurgery treatment of 12 -12.5 Gy to the focus of residual disease defined on contrast enhanced T1 weighted MRI.

Conclusions: The combination of induction methotrexate-based chemotherapy with or without rituximab, LD-WBRT and radiosurgery appears effective and well tolerated in patients with primary CNS lymphoma who achieve a partial response (PR) to chemotherapy with minimal residual disease. Longer follow-up and larger patient numbers are clearly needed for confirmation.