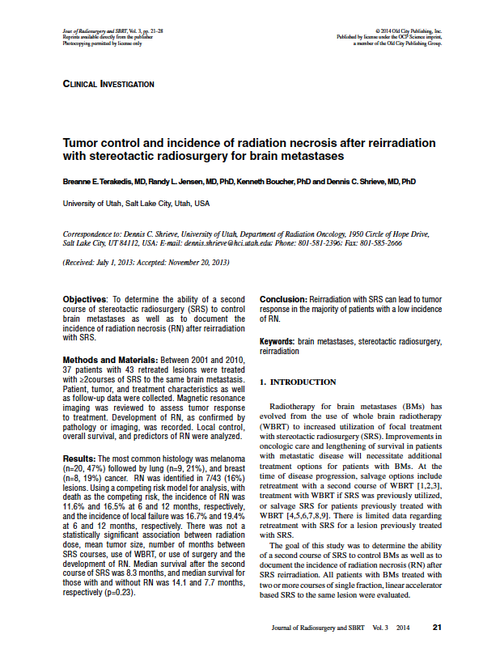 Objective: To determine the ability of a second course of stereotactic radiosurgery (SRS) to control brain metastases as well as to document the incidence of radiation necrosis (RN) after reirradiation with SRS.

Methods and Materials: Between 2001 and 2010, 37 patients with 43 retreated lesions were treated with ≥2courses of SRS to the same brain metastasis. Patient, tumor, and treatment characteristics as well as follow-up data were collected. Magnetic resonance imaging was reviewed to assess tumor response to treatment. Development of RN, as confirmed by pathology or imaging, was recorded. Local control, overall survival, and predictors of RN were analyzed. We performed a retrospective review of a prospectively compiled database evaluating the outcomes of 43 patients with CPA meningiomas treated at the University of Virginia from 1990 to 2006. There were 36 females and 7 males with a median age of 65 years (range 30-79). Twenty-eight were treated with primary radiosurgery, and 15 patients were treated with adjuvant radiosurgery after surgical resection. Patients were assessed clinically and radiologically at routine intervals following GKRS. Kaplan-Meier analysis was used to assess tumor progression.

Results: The most common histology was melanoma (n=20, 47%) followed by lung (n=9, 21%), and breast (n=8, 19%) cancer. RN was identified in 7/43 (16%) lesions. Using a competing risk model for analysis, with death as the competing risk, the incidence of RN was 11.6% and 16.5% at 6 and 12 months, respectively, and the incidence of local failure was 16.7% and 19.4% at 6 and 12 months, respectively. There was not a statistically significant association between radiation dose, mean tumor size, number of months between SRS courses, use of WBRT, or use of surgery and the development of RN. Median survival after the second course of SRS was 8.3 months, and median survival for those with and without RN was 14.1 and 7.7 months, respectively (p=0.23).

Conclusions: Reirradiation with SRS can lead to tumor response in the majority of patients with a low incidence of RN.