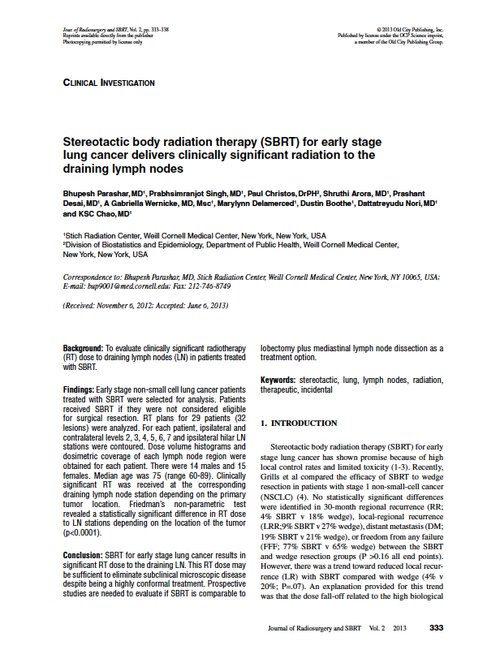 Findings: Early stage non-small cell lung cancer patients treated with SBRT were selected for analysis. Patients received SBRT if they were not considered eligible for surgical resection. RT plans for 29 patients (32 lesions) were analyzed. For each patient, ipsilateral and contralateral levels 2, 3, 4, 5, 6, 7 and ipsilateral hilar LN stations were contoured. Dose volume histograms and dosimetric coverage of each lymph node region were obtained for each patient. There were 14 males and 15 females. Median age was 75 (range 60-89). Clinically significant RT was received at the corresponding draining lymph node station depending on the primary tumor location. Friedman’s non-parametric test revealed a statistically significant difference in RT dose to LN stations depending on the location of the tumor (p<0.0001).

Conclusion: SBRT for early stage lung cancer results in significant RT dose to the draining LN. This RT dose may be sufficient to eliminate subclinical microscopic disease despite being a highly conformal treatment. Prospective studies are needed to evaluate if SBRT is comparable to lobectomy plus mediastinal lymph node dissection as a treatment option.