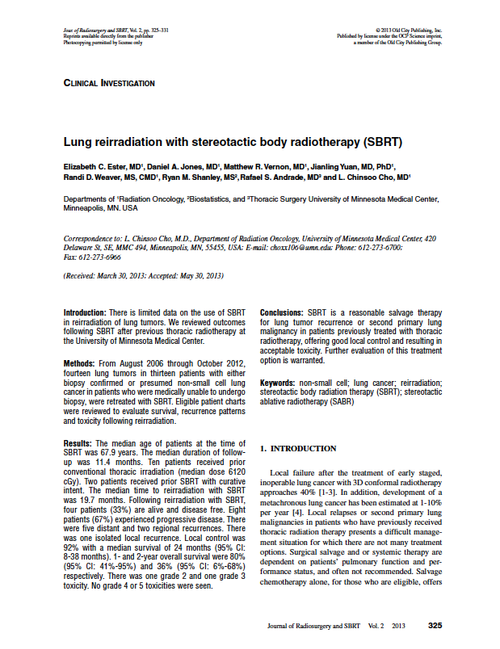 Introduction: There is limited data on the use of SBRT in reirradiation of lung tumors. We reviewed outcomes following SBRT after previous thoracic radiotherapy at the University of Minnesota Medical Center.

Methods: From August 2006 through October 2012, fourteen lung tumors in thirteen patients with either biopsy confirmed or presumed non-small cell lung cancer in patients who were medically unable to undergo biopsy, were retreated with SBRT. Eligible patient charts were reviewed to evaluate survival, recurrence patterns and toxicity following reirradiation.

Results: The median age of patients at the time of SBRT was 67.9 years. The median duration of followup was 11.4 months. Ten patients received prior conventional thoracic irradiation (median dose 6120 cGy). Two patients received prior SBRT with curative intent. The median time to reirradiation with SBRT was 19.7 months. Following reirradiation with SBRT, four patients (33%) are alive and disease free. Eight patients (67%) experienced progressive disease. There were five distant and two regional recurrences. There was one isolated local recurrence. Local control was 92% with a median survival of 24 months (95% CI: 8-38 months). 1- and 2-year overall survival were 80% (95% CI: 41%-95%) and 36% (95% CI: 6%-68%) respectively. There was one grade 2 and one grade 3 toxicity. No grade 4 or 5 toxicities were seen..