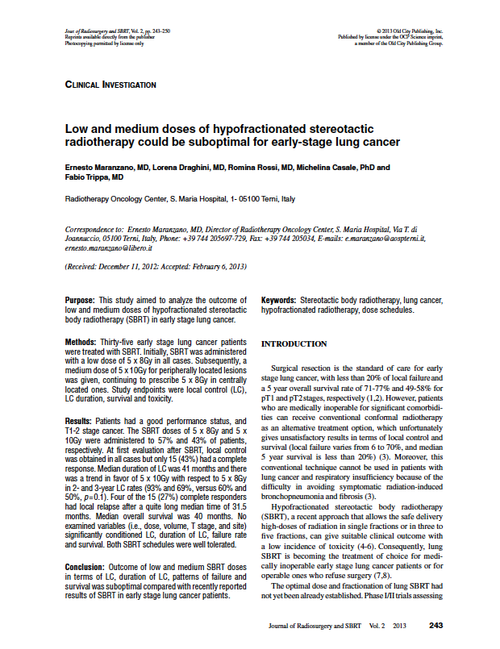 Methods: Thirty-five early stage lung cancer patients were treated with SBRT. Initially, SBRT was administered with a low dose of 5 x 8Gy in all cases. Subsequently, a medium dose of 5 x 10Gy for peripherally located lesions was given, continuing to prescribe 5 x 8Gy in centrally located ones. Study endpoints were local control (LC), LC duration, survival and toxicity.

Results: Patients had a good performance status, and T1-2 stage cancer. The SBRT doses of 5 x 8Gy and 5 x 10Gy were administered to 57% and 43% of patients, respectively. At first evaluation after SBRT, local control was obtained in all cases but only 15 (43%) had a complete response. Median duration of LC was 41 months and there was a trend in favor of 5 x 10Gy with respect to 5 x 8Gy in 2- and 3-year LC rates (93% and 69%, versus 60% and 50%, p = 0.1). Four of the 15 (27%) complete responders had local relapse after a quite long median time of 31.5 months. Median overall survival was 40 months. No examined variables (i.e., dose, volume, T stage, and site) significantly conditioned LC, duration of LC, failure rate and survival. Both SBRT schedules were well tolerated.

Conclusion: Outcome of low and medium SBRT doses in terms of LC, duration of LC, patterns of failure and survival was suboptimal compared with recently reported results of SBRT in early stage lung cancer patients.