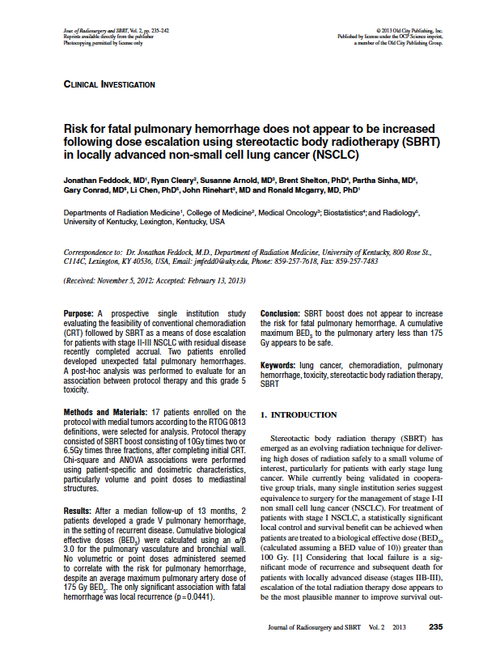 Purpose: A prospective single institution study evaluating the feasibility of conventional chemoradiation (CRT) followed by SBRT as a means of dose escalation for patients with stage II-III NSCLC with residual disease recently completed accrual. Two patients enrolled developed unexpected fatal pulmonary hemorrhages. A post-hoc analysis was performed to evaluate for an association between protocol therapy and this grade 5 toxicity.

Methods and Materials: 17 patients enrolled on the protocol with medial tumors according to the RTOG 0813 definitions, were selected for analysis. Protocol therapy consisted of SBRT boost consisting of 10Gy times two or 6.5Gy times three fractions, after completing initial CRT. Chi-square and ANOVA associations were performed using patient-specific and dosimetric characteristics, particularly volume and point doses to mediastinal structures.

Results: After a median follow-up of 13 months, 2 patients developed a grade V pulmonary hemorrhage, in the setting of recurrent disease. Cumulative biological effective doses (BED3) were calculated using an α/β 3.0 for the pulmonary vasculature and bronchial wall. No volumetric or point doses administered seemed to correlate with the risk for pulmonary hemorrhage, despite an average maximum pulmonary artery dose of 175 Gy BED3. The only significant association with fatal hemorrhage was local recurrence (p = 0.0441).

Conclusion: SBRT boost does not appear to increase the risk for fatal pulmonary hemorrhage. A cumulative maximum BED3 to the pulmonary artery less than 175 Gy appears to be safe.