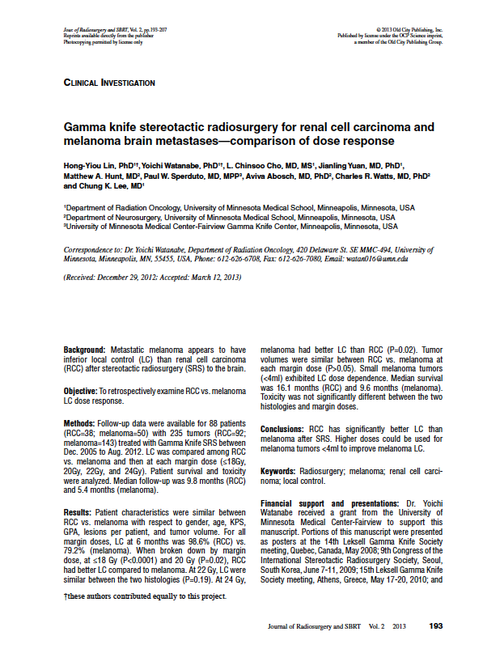 Results: Patient characteristics were similar between RCC vs. melanoma with respect to gender, age, KPS, GPA, lesions per patient, and tumor volume. For all margin doses, LC at 6 months was 98.6% (RCC) vs. 79.2% (melanoma). When broken down by margin dose, at ≤18 Gy (P<0.0001) and 20 Gy (P=0.02), RCC had better LC compared to melanoma. At 22 Gy, LC were similar between the two histologies (P=0.19). At 24 Gy, melanoma had better LC than RCC (P=0.02). Tumor volumes were similar between RCC vs. melanoma at each margin dose (P>0.05). Small melanoma tumors (<4ml) exhibited LC dose dependence. Median survival was 16.1 months (RCC) and 9.6 months (melanoma). Toxicity was not significantly different between the two histologies and margin doses.

Conclusion: RCC has significantly better LC than melanoma after SRS. Higher doses could be used for melanoma tumors