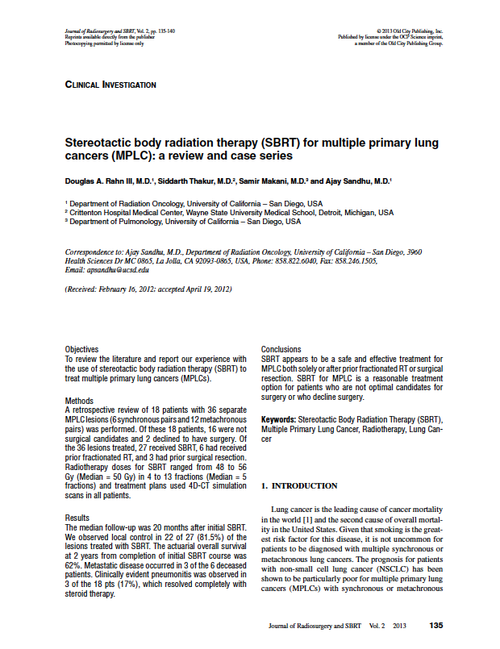 Objectives: To review the literature and report our experience with the use of stereotactic body radiation therapy (SBRT) to treat multiple primary lung cancers (MPLCs).

Methods: A retrospective review of 18 patients with 36 separate MPLC lesions (6 synchronous pairs and 12 metachronous pairs) was performed. Of these 18 patients, 16 were not surgical candidates and 2 declined to have surgery. Of the 36 lesions treated, 27 received SBRT, 6 had received prior fractionated RT, and 3 had prior surgical resection. Radiotherapy doses for SBRT ranged from 48 to 56 Gy (Median = 50 Gy) in 4 to 13 fractions (Median = 5 fractions) and treatment plans used 4D-CT simulation scans in all patients.

Results: The median follow-up was 20 months after initial SBRT. We observed local control in 22 of 27 (81.5%) of the lesions treated with SBRT. The actuarial overall survival at 2 years from completion of initial SBRT course was 62%. Metastatic disease occurred in 3 of the 6 deceased patients. Clinically evident pneumonitis was observed in 3 of the 18 pts (17%), which resolved completely with steroid therapy.

Conclusion: SBRT appears to be a safe and effective treatment for MPLC both solely or after prior fractionated RT or surgical resection. SBRT for MPLC is a reasonable treatment option for patients who are not optimal candidates for surgery or who decline surgery.