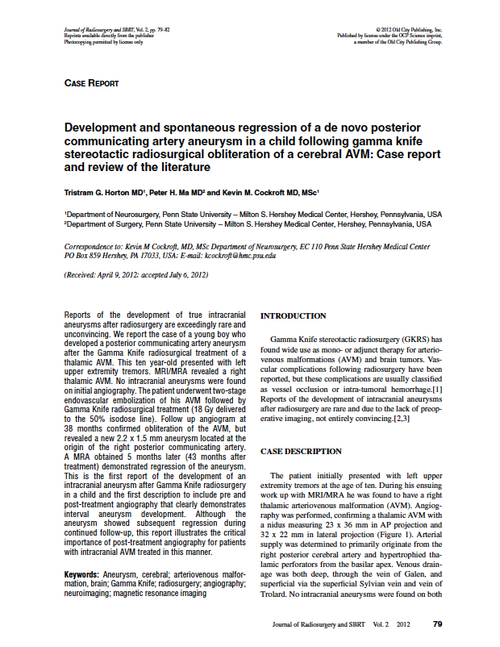 Reports of the development of true intracranial aneurysms after radiosurgery are exceedingly rare and unconvincing. We report the case of a young boy who developed a posterior communicating artery aneurysm after the Gamma Knife radiosurgical treatment of a thalamic AVM. This ten year-old presented with left upper extremity tremors. MRI/MRA revealed a right thalamic AVM. No intracranial aneurysms were found on initial angiography. The patient underwent two-stage endovascular embolization of his AVM followed by Gamma Knife radiosurgical treatment (18 Gy delivered to the 50% isodose line). Follow up angiogram at 38 months confirmed obliteration of the AVM, but revealed a new 2.2 x 1.5 mm aneurysm located at the origin of the right posterior communicating artery. A MRA obtained 5 months later (43 months after treatment) demonstrated regression of the aneurysm. This is the first report of the development of an intracranial aneurysm after Gamma Knife radiosurgery in a child and the first description to include pre and post-treatment angiography that clearly demonstrates interval aneurysm development. Although the aneurysm showed subsequent regression during continued follow-up, this report illustrates the critical importance of post-treatment angiography for patients with intracranial AVM treated in this manner.