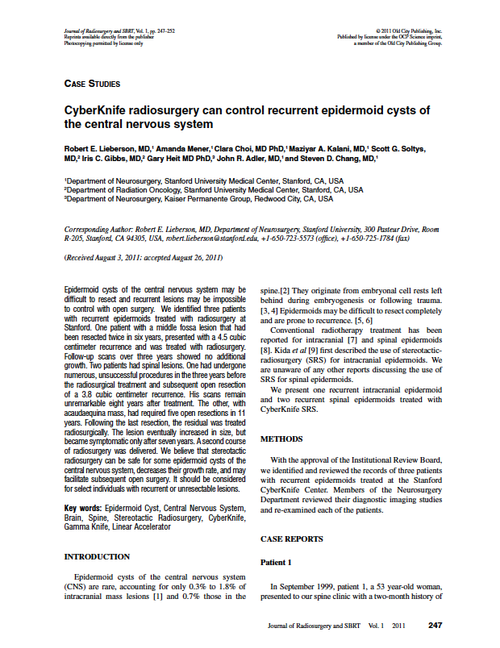 Epidermoid cysts of the central nervous system may be difficult to resect and recurrent lesions may be impossible to control with open surgery. We identified three patients with recurrent epidermoids treated with radiosurgery at Stanford. One patient with a middle fossa lesion that had been resected twice in six years, presented with a 4.5 cubic centimeter recurrence and was treated with radiosurgery. Follow-up scans over three years showed no additional growth. Two patients had spinal lesions. One had undergone numerous, unsuccessful procedures in the three years before the radiosurgical treatment and subsequent open resection of a 3.8 cubic centimeter recurrence. His scans remain unremarkable eight years after treatment. The other, with acaudaequina mass, had required five open resections in 11 years. Following the last resection, the residual was treated radiosurgically. The lesion eventually increased in size, but became symptomatic only after seven years. A second course of radiosurgery was delivered. We believe that stereotactic radiosurgery can be safe for some epidermoid cysts of the central nervous system, decreases their growth rate, and may facilitate subsequent open surgery. It should be considered for select individuals with recurrent or unresectable lesions.