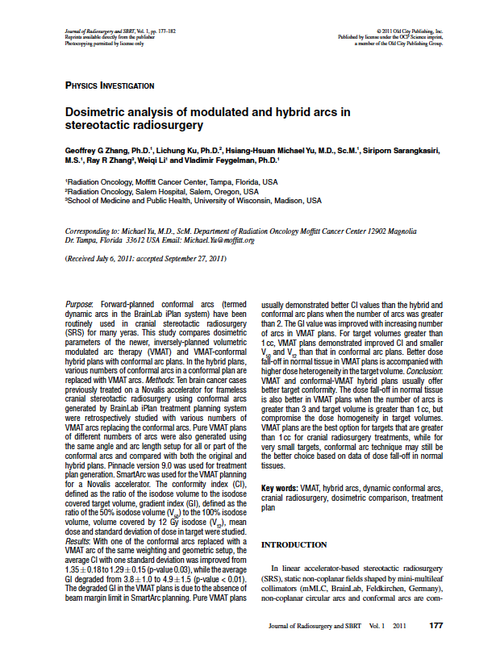 Methods: Ten brain cancer cases previously treated on a Novalis accelerator for frameless cranial stereotactic radiosurgery using conformal arcs generated by BrainLab iPlan treatment planning system were retrospectively studied with various numbers of VMAT arcs replacing the conformal arcs. Pure VMAT plans of different numbers of arcs were also generated using the same angle and arc length setup for all or part of the conformal arcs and compared with both the original and hybrid plans. Pinnacle version 9.0 was used for treatment plan generation. SmartArc was used for the VMAT planning for a Novalis accelerator. The conformity index (CI), defined as the ratio of the isodose volume to the isodose covered target volume, gradient index (GI), defined as the ratio of the 50% isodose volume (V50) to the 100% isodose volume, volume covered by 12 Gy isodose (V12), mean dose and standard deviation of dose in target were studied.

Results: With one of the conformal arcs replaced with a VMAT arc of the same weighting and geometric setup, the average CI with one standard deviation was improved from 1.35 ± 0.18 to 1.29 ± 0.15 (p-value 0.03), while the average GI degraded from 3.8 ± 1.0 to 4.9 ± 1.5 (p-value < 0.01). The degraded GI in the VMAT plans is due to the absence of beam margin limit in SmartArc planning. Pure VMAT plans usually demonstrated better CI values than the hybrid and conformal arc plans when the number of arcs was greater than 2. The GI value was improved with increasing number of arcs in VMAT plans. For target volumes greater than 1 cc, VMAT plans demonstrated improved CI and smaller V50 and V12 than that in conformal arc plans. Better dose fall-off in normal tissue in VMAT plans is accompanied with higher dose heterogeneity in the target volume.

Conclusion: VMAT and conformal-VMAT hybrid plans usually offer better target conformity. The dose fall-off in normal tissue is also better in VMAT plans when the number of arcs is greater than 3 and target volume is greater than 1 cc, but compromise the dose homogeneity in target volumes. VMAT plans are the best option for targets that are greater than 1 cc for cranial radiosurgery treatments, while for very small targets, conformal arc technique may still be the better choice based on data of dose fall-off in normal tissues.