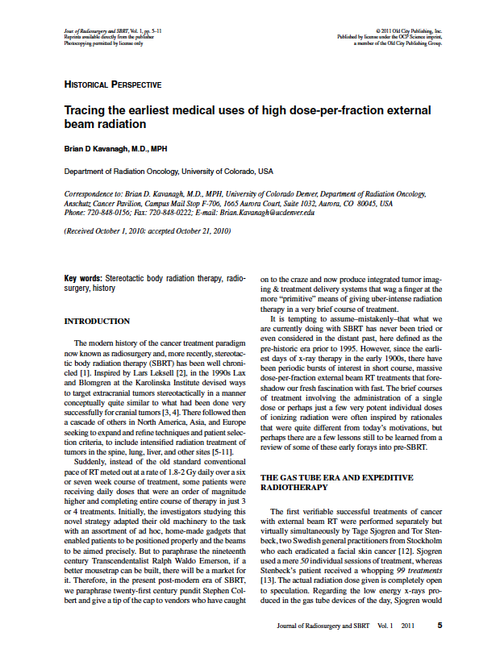 The modern history of the cancer treatment paradigm now known as radiosurgery and, more recently, stereotactic body radiation therapy (SBRT) has been well chronicled [1]. Inspired by Lars Leksell [2], in the 1990s Lax and Blomgren at the Karolinska Institute devised ways to target extracranial tumors stereotactically in a manner conceptually quite similar to what had been done very successfully for cranial tumors [3, 4]. There followed then a cascade of others in North America, Asia, and Europe seeking to expand and refine techniques and patient selection criteria, to include intensified radiation treatment of tumors in the spine, lung, liver, and other sites [5-11].

Suddenly, instead of the old standard conventional pace of RT meted out at a rate of 1.8-2 Gy daily over a six or seven week course of treatment, some patients were receiving daily doses that were an order of magnitude higher and completing entire course of therapy in just 3 or 4 treatments. Initially, the investigators studying this novel strategy adapted their old machinery to the task with an assortment of ad hoc, home-made gadgets that enabled patients to be positioned properly and the beams to be aimed precisely. But to paraphrase the nineteenth century Transcendentalist Ralph Waldo Emerson, if a better mousetrap can be built, there will be a market for it. Therefore, in the present post-modern era of SBRT, we paraphrase twenty-first century pundit Stephen Colbert and give a tip of the cap to vendors who have caught on to the craze and now produce integrated tumor imaging & treatment delivery systems that wag a finger at the more “primitive” means of giving uber-intense radiation therapy in a very brief course of treatment.

It is tempting to assume–mistakenly–that what we are currently doing with SBRT has never been tried or even considered in the distant past, here defined as the pre-historic era prior to 1995. However, since the earliest days of x-ray therapy in the early 1900s, there have been periodic bursts of interest in short course, massive dose-per-fraction external beam RT treatments that foreshadow our fresh fascination with fast. The brief courses of treatment involving the administration of a single dose or perhaps just a few very potent individual doses of ionizing radiation were often inspired by rationales that were quite different from today’s motivations, but perhaps there are a few lessons still to be learned from a review of some of these early forays into pre-SBRT.