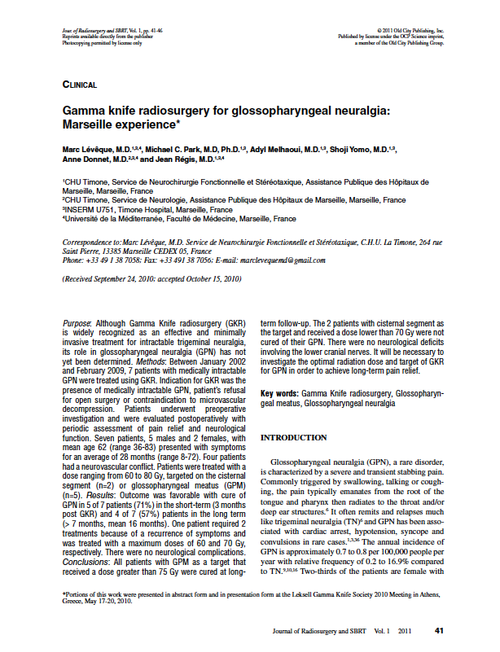 Purpose: Although Gamma Knife radiosurgery (GKR) is widely recognized as an effective and minimally invasive treatment for intractable trigeminal neuralgia, its role in glossopharyngeal neuralgia (GPN) has not yet been determined.

Methods: Between January 2002 and February 2009, 7 patients with medically intractable GPN were treated using GKR. Indication for GKR was the presence of medically intractable GPN, patient’s refusal for open surgery or contraindication to microvascular decompression. Patients underwent preoperative investigation and were evaluated postoperatively with periodic assessment of pain relief and neurological function. Seven patients, 5 males and 2 females, with mean age 62 (range 36-83) presented with symptoms for an average of 28 months (range 8-72). Four patients had a neurovascular conflict. Patients were treated with a dose ranging from 60 to 80 Gy, targeted on the cisternal segment (n=2) or glossopharyngeal meatus (GPM) (n=5).

Results: Outcome was favorable with cure of GPN in 5 of 7 patients (71%) in the short-term (3 months post GKR) and 4 of 7 (57%) patients in the long term (> 7 months, mean 16 months). One patient required 2 treatments because of a recurrence of symptoms and was treated with a maximum doses of 60 and 70 Gy, respectively. There were no neurological complications.

Conclusions: All patients with GPM as a target that received a dose greater than 75 Gy were cured at longterm follow-up. The 2 patients with cisternal segment as the target and received a dose lower than 70 Gy were not cured of their GPN. There were no neurological deficits involving the lower cranial nerves. It will be necessary to investigate the optimal radiation dose and target of GKR for GPN in order to achieve long-term pain relief.